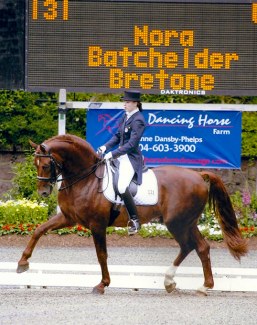 Bretone was a 1995 born Hanoverian by Brentano II out of Santiana (by Salut). He was bred by Josef Engelke in Germany.

Initially owned by Johann-Klaus Brunkhorst, the chestnut stallion was licensed at the 1997 Hanoverian Stallion Licensing and did his 100-day stallion performance test in Medingen in August 1998. He scored 122.02 points for dressage and 109.30 points for show jumping to finish third on a total of 123.25 points.

He was first competed by Brunkhorst in 2000 in the L-level dressage horse tests. In 2003 at age 8 the stallion moved up to M-level. He did his last local show at that level in September 2004.

During his time as a breeding stallion in Germany he produced 37 offspring that are registered for sport with the German equestrian federation, one of them is a state premium mare. His two most successful ones, Britania and Boccachino are both being jumped or evented.

Bretone sold to Verne Batchelder in the U.S.A. in 2004 as the successor for Nora's horse Maronjo.

Shortly after his arrival he injured himself and was sent to River House Hanoverians in New Hampshire, where he was rehabbed.

"Tony went to college with me where he finished his education to Grand Prix and was a barn favorite. I'd come to the boarding barn and find little kids sitting on him while he was sleeping," Nora reminisced.

One year and a half into their training Batchelder and Bretone were at Intermediaire II level and competed in the qualifiers of the inaugural Brentina Cup, the American Under 25 division similar to the Piaff Forderpreis.

"We went to the Brentina Cup three times, finishing fifth in 2006 as well as in 2010, and I competed him for many years at Grand Prix. Tony won numerous Regional Championship titles, he earned several “10”s for his fabulous ones tempis, and even broke 80% in the Grand Prix Freestyle. He was the USDF/Adequan All Breeds Hanoverian Grand Prix Freestyle Horse of the Year for 4 consecutive years (2008-2011).

"Tony" was a schoolmaster for Lee Longfield, Clark Moss and Celina Collins, who all earned their USDF Medals on him.

He competed in his last show in November 2020 at age 25. Unfortunately, shortly afterwards he foundered and could not be saved.