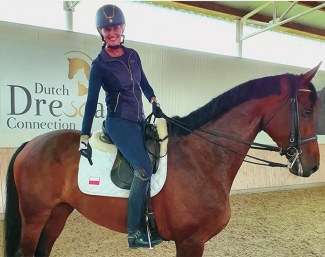 Idwinaretto is by Everdale out of Betwina (by Johnson x Winston x Aktuell). She is bred by P. Dolfsma in The Netherlands.

The 1.75 m tall standing mare was originally named Inbetwina LH and sold as a foal with the dam to Lickley Horses in the U.K.

In 2017 she made her national competition debut as a 4-year old under Darren Hicks and at the end of the season placed sixth in the first round of the 2017 British Young Horse Championships for 4-year olds.

Lickley then sold the mare to Gert-Jan van Olst in The Netherlands, who re-sold her to Katarzyna Milczarek in Poland.

She was renamed Idwinaretto and Milczarek developed her to Grand Prix level.

Yvonne Losos de Muniz tried out the mare while she was in Germany competing at the CDIO Aachen and decided to add her to her string of horses, which includes her number one Aquamarijn and rising Grand Prix horse Felicia.

"She's a tall, powerful mare with outstanding movement and ability," said Losos de Muniz about Idwinaretto. "She has been undefeated in Poland for the last two years."

Losos de Muniz is currently based in Gijon, Spain for her European summer tour but will soon move with her horses to her winter base in Wellington, Florida.