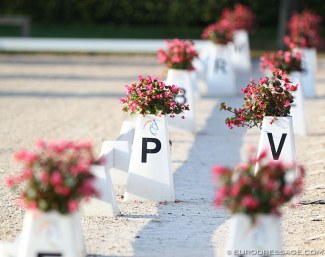 Guest columnist of this week is Marguerite Kavanagh, chair of Dressage Ireland. She wrote this column from her experience with the difficulties encountered by dressage riders who have dyslexia. She feels the dressage community needs to start a discussion on the matter and work collectively to support riders with dyslexia in the sport, to keep them in the sport and be seen to be more inclusive to those contemplating getting into the sport.

Dyslexia can be described as a neurobiological disorder which affects a person's ability to read and write, it affects their memory, organisation, concentration, ability to multitask and communication. Interestingly when you now take the description of Dressage the challenges become clearer .

Dressage is a way of training a horse so that it can maintain suppleness and strength while maintaining a calm and attentive manner. However when it comes to a Dressage competition it becomes a bit more challenging  The horse and rider perform a series of predetermined movements or figures in an arena of either 20 x 60 metres or a 20 x 40 metres . The 20 x 60 arena has 12 letters placed symmetrically indicating where movements start and finish and where changes of pace occur , in either walk trot or canter , additionally smooth transitions within the paces are also judged on a scale of 0 to 10. 10 being perfection ! The letters are not in alphabetical order which can also add to the difficulty.

Fifteen to twenty percent of the population are believed to be dyslexic, but it is still poorly understood and especially when it comes to Dressage. A dyslexic person looks normal, appears to do all the normal things, and usually have become expert at putting up a facade to hide their difficulties. They often have to work harder than others and put in extra hours to over come daily challenges. Such a facade requires additional energy and can in itself become tiresome.

Reading and writing is the most common difficulty and some dyslexic people experience a visual stress when reading that makes words unclear, distorted or even appear to move .

Another issue faced is too much information, such as a list of instructions or directions which makes it harder for the dyslexic brain to process. In addition to all the above, poor short term memory and concentration mean that learning a dressage test is phenomenally difficult, it becomes even more complicated when they don’t know their right from their left. Often dyslexia is accompanied with dyscalculia (problems with mathematics) Speech and language disorders and Dyspraxia ( ffecting fine and gross motor coordination).

In truth dyslexic children or adults competing in dressage face huge handicaps, and when they are not allowed a caller at National Championships or festival championships the obstacles they face make it near impossible for them to compete.  As dyslexic riders see their condition as a learning disability they don’t see themselves physically challenged and as such feel that they do not warrant being classified as a para rider. However Para riders are allowed compete in able bodied classes with compensatory aids according to their classification and these may include, riding with a whip, rein attachments or having a caller at championships. Surely the time has come that riders with a diagnosis of dyslexia should have similar compensations.

Dyslexia is a complex disorder and can only be diagnosed by an educational psychologist and usually involves a fee of over €500. The assessment clearly distinguishes the difficulties encountered with learning in a person of average or above average intelligence. Of course some dyslexic people attain very high academic achievements, through their own intricate coping mechanisms and through a educational and college based system that now recognises that Dyslexic people need support and when given reasonable accommodations in the form of extra time for exams, a spelling waiver, a reader or writer they can achieve success the same as others .

I would now argue that the time has come that Dressage organisations throughout the world recognise Dyslexia as a learning difficulty and as such allow these riders similar accommodations in the form of a caller for their tests. I don’t believe it gives them any unfair advantage as the complexity of Dyslexia makes short term memory incredibly difficult, their ability to phonologically understand the sound of letters, V and P sound the same, their ability to follow instructions or follow a pattern, and multitask all adds to the enormous challenges they face. With all this in mind they also have to concentrate on their position and horses way of going.

I feel strongly that it’s time the Equestrian community wake up to the dilemma faced by dressage riders with dyslexia, and understand and make accommodations for such riders.

Many riders with dyslexia have struggled internally with other peoples misconceptions, they have all experienced feeling of being stupid and embarrassment many suffer with poor self esteem. Surely as a dressage community we like our education system need to support such riders with a diagnosis of dyslexia and give them the opportunities they deserve. For some children and adults riding may be the one thing they excel at, it gives them happiness and confidence that they don't get in the classroom, they often have a skill and feel on a horse that brings out the best in them and the horse. Our current system discourages dyslexic riders from achieving their full potential at championships as the fear of forgetting the test is front and foremost in their minds and their energy and focus is absorbed by remembering the test rather than the way of going .

For the good of the sport, for the good of riders with dyslexia and their self esteem, callers at championships must be allowed. Would we prevent a person with a physical leg disability from using a whip in an abled bodied competition so why should we deny a person with a diagnosis of Dyslexia a caller !