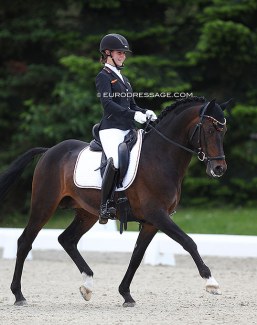 De Long is a 15-year old Brandenburger bred pony stallion by HB Daylight out of D-S Roxy Brice (by Brillant x Royal Prince). He is bred by Susanne Olnhoff.

He was licensed as a stallion at the licensing in Radegast in January 2009 and did his 30-day performance test in Neustadt/Dosse in November 2010, scoring 8.26 points and finishing 5th out of 20 participating stallions.

In 2015 De Long sold to the Merkt family as a ride for son Philipp.

The new duo made had its CDI show debut in June 2016 in Hagen and also competed in 2017 in Nieuw en St. Joosland and Saumur.

In 2019 younger sister Lena took over the ride, but only showed nationally

The experienced 15-year old pony will now move on as a schoolmaster for Semmieke Rothenberger's student Laura Martin.