The Totilas Effect? The Evolution of Medal Winning Scores 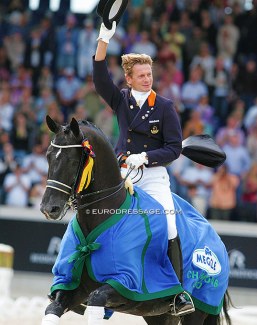 David Stickland of Global Dressage Analytics is a senior Research Phsyicist with Princeton University, who is based at CERN in Geneva, Switzerland, where he works on experiments as the coordinator of beam conditions and luminosity. He is also an avid dressage fan and loves to analyse dressage scores. David has been a regular contributor to Eurodressage for the past decade.

The Totilas Effect? The Evolution of Medal Winning Scores

Now we have reached the end of the championship season I thought it would be interesting to see how the Team Medal scores have evolved over the last 20 years or so.

The exact rules for Team medals have changed a little in that time, but for simplicity I used the average Grand Prix (or Grand Prix Special or in some cases the sum of both) scores for the three top scoring combinations for each nation. This may be slightly different from the scores used in the medal calculations, but it is the simplest one from which to track the evolution.

Something radical happened between 2008 and 2009, not just for the Gold Medal but also for the other medals, all scores really stepped up!

So those are the facts, now for some conjecture: what happened in 2009? Totilas hits the scene. 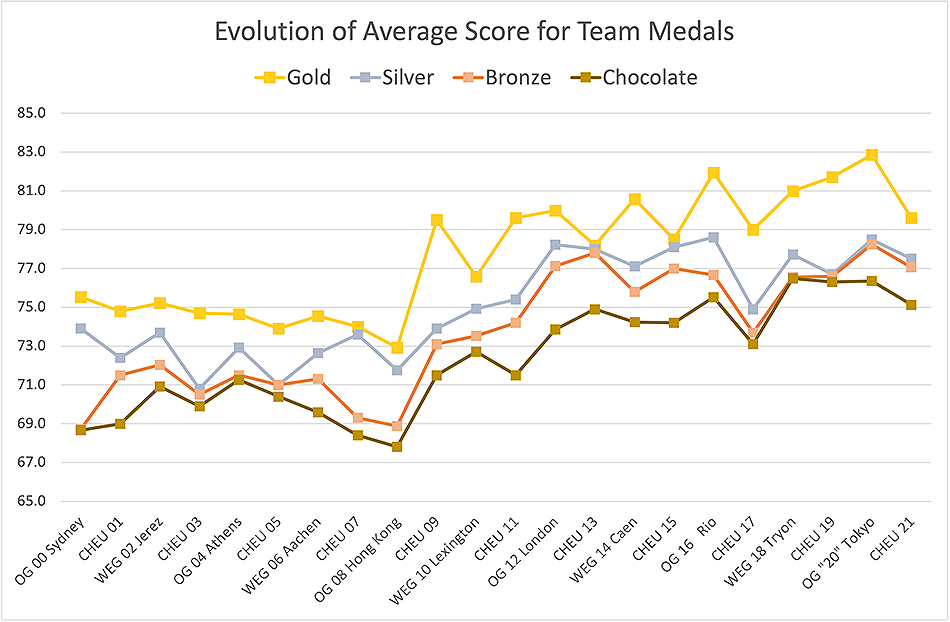 In June 2009 Edward Gal competed Totilas for the first time internationally at Grand Prix level at the CDIO Rotterdam for a 79.149%, and I saw him 4 weeks later in Hickstead - thank you Dane Rawlins for that great show - when he hit 79.745 and the world woke up to a sea change in Dressage.

Just a month later and they hit 84.085% in the European Championships in Windsor, where I also had the great pleasure to attend including a wonderful champagne session with the Dutch team in a very surprised local Windsor pub, that I suspect had never sold so much champagne in one evening before or since!

The combination was, as we all know, a short lived one but they hit 85.708% in the Special in Lexington before Totilas changed owner.

Of course, Totilas was rapidly followed, and then surpassed, by Valegro, but the shift in scores had happened and I would argue that the shift in horse performance since then was genuine and not a scoring artefact.

I just want to point out one other interesting thing that has happened since 2008. If you look for each team how many of the riders were above that team average and how many below there has been one more important change. I looked at the top 6 teams: back in 2008 40% of the team riders were above the team average – what that really means with 3-rider teams is that most teams had one “strong” and two “weaker” combinations. By 2021 this has completely reversed, now 60% of the team riders scored above their team average (so two “stronger” and one “weaker” combination).

In fact, in 2008 only one nation had two strong and one weaker rider, while in 2021 it was the opposite, only one team had one stronger and two weaker riders.

Team “depth" across all these nations has radically increased, and that can’t be more exemplified than by the depth of the German team performance in Tokyo: 84.668%, 83.298%, 80.608%, where clearly no ride can honestly be described as “weaker”!

So, did Totilas change the picture, was he the first of the new generation?

A the same time over the intervening years and after Totilas, I think harmony has become a more and more important measure, which makes the sport even more beautiful. IMHO.

Related Links
David Stickland: Nobody is Perfect...but Some are Pretty Close to It
Tokyo Paralympics, a Quick Round-Up before It Starts