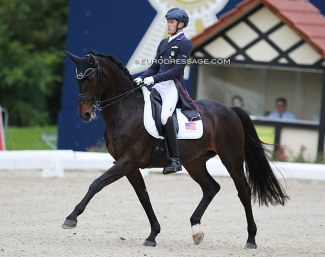 U.S. Olympic team short listed rider Benjamin Ebeling will be pursuing dual citizenship so he can stay in Europe and continue his training at top level.

Ebeling and his 13-year old Belgian warmblood gelding Illuster van de Kampert (by Spielberg x Contango) have been staying in Hagen, Germany, to train with Christoph Koschel in preparation of his campaign to qualify on the U.S. team for the 2022 World Championships in Herning next summer.

In order to be allowed to stay in Europe long-term, Ebeling is seeking German citizenship.

"I love being in Germany and the training is really great," he told Dressage-News. "It’s very inspirational to be here at the European Championships in Hagen with all these fantastic riders. Of course, you see fantastic riders in the States but I also get to see European riders and what they’re doing—even to watch them in the warmup arena is inspiring.”

Ben began riding Illuster van de Kampert at Young Riders level in 2019 and moved him up to Under 25 level in the summer of that year. He moved into the senior division in 2020 when he saw the possibility of getting short listed for the U.S. Olympic team for Tokyo. Ebeling has now set the 2022 World Championships in Herning as new target. He competed last weekend in the 3* tour in Hagen, Germany.

"I grew up here watching my Dad when he came over,” Ben explained. “My Dad is full German, I’m half German. I’ve spent a lot of time in Germany and still have some family here and a lot of friends from the European Young Rider tours. I say expand field of view as in you’re exposed to a lot more riding here from a lot of different riders than you would see in the States and you can almost discern the different styles of riding… and for me because I see the Americans all the time so I can see the difference between these riding styles."

Read the full interview on Dressage-News