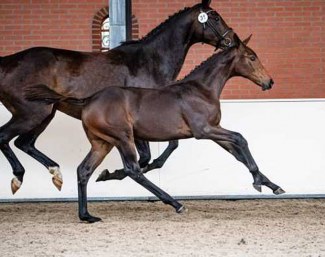 32 talented dressage and jumping foals went under the digital hammer on 13 September 2021. It was the fifth edition of the KWPN Online Foal Auction. Both internationally and nationally there was much interest in the collection.

One of the most striking foals was the Glamourdale filly Rharzar. This Glamourdale daughter shows a lot of movement qualities and that did not go unnoticed. The counter finally stopped at 9,000 euro and she will move to Spain.

Rudie (by Blue Hors Liviusx San Amour II) was the second most expensive foal of the auction and sold to Russia for 8,500 euro.

The most expensive jumping foals were Rouglas Ryal K (by Douglas) and Radiena-T (by Diarado). They sold for 8,000 euro and both will stay in the Netherlands.

In total nine foals will cross the border, besides a Russian buyer buyers report from Germany, Belgium, Spain, England and Sweden.