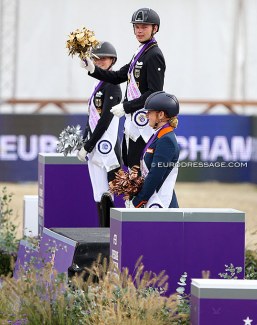 The smile never left the face of the 22-year-old European Champion - Raphael Netz from Aubenhausen won his second title after team gold at the 2021 European Under 25 Championships in Hagen a.T.W. at Hof Kasselmann with the 13-year-old stallion Elastico.

"You set off with the intention of doing the best possible, but I can't believe it yet. I think someone has to pinch me," said the new young champion a little breathlessly.

European Under 25 Gold on Catch Ride

"Elastico is a cool guy, he is beautiful, black and incredibly fun to ride," Raphael Netz enthused about his four-legged sports partner.

Actually, he was supposed to keep the horse fit for the Japanese owner Akane Kuroki, so " light riding, jogging and stuff like that...". And then one day a dream came true. "She asked me if I wanted to show Elastico at competitions and of course I said yes...", Raphael Netz said.

The 76.308 percent for the performance in the U25 Grand Prix is a personal best for the young dressage rider, who trains and works with Benjamin Werndl and Jessica von Bredow-Werndl.

Elastico is a KWPN bred Johnson x Concorde offspring, who was first trained by Saskia van Es before owners Johan Frencken and Sophie Textor. sold sold him to Kuroki in the summer of 2019.

The 22-year old Raphael Netz is a professional dressage rider and works as an assistant rider at Jessica and Benjamin Werndl's Aubenhausen stable. He made his international show debut on ponies in 2013 and competed ponies Schierensees Don't Do It, Skylinger, and Fin C for three years in a row. His last CDI on ponies was the 2015 CDI Vienna. In March 2017 he returned to the CDI ring as a young rider on Ritz Carlton and Lacoste.

Semmieke Rothenberger  and her eleven-year-old Dutch warmblood Flanell (by Apache x Don Schufro) won silver with a fraction of a point less, 76.256 %. The pair was in the lead for the victory until the very end of their test when right before the final halt, Flanell broke into canter.

"She is an incredible horse, we are only having our fourth show here and she just keeps inspiring me."

Rothenberger, whose elder sister Sanneke won the inaugural European Under 25 Championships in 2016 in Hagen, has already had an eventful week in Hagen. Semmieke won team gold on Wednesday, but during the lap of honour in the prize giving ceremony, she got bucked off her horse Dissertation with all the commotion going on. The rider was back on her feet in no time and the horse caught.

"I already think we are a dream team, Chocolate and me," said Poelman, who only acquired the 14-year old KWPN gelding (by Johnson x Livingstone) in November 2020 as a schoolmaster.

Chocolate Cookie RDP was previously trained and competed by Jenny Schreven and NIikki Schaap. In 2020 Dutch Under 25 rider Dana van Lierop took over the ride and were selected as Dutch team reserves for the 2020 European Under 25 Championships. Poelman and Chocolate Cookie RDP have only competed in nine shows before Hagen.

Seniors and U25 in One Venue

The young riders think it is "really good" that both championships - i.e. for seniors and U25 - take place together.

"We also get support from the seniors," says Jessica Poelmann.

Supporting the young riders is also the common objective of the presenting sponsor BEMER Int. AG and the organiser Hof Kasselmann. "We have been able to gather a lot of experience in equestrian sport and would like to make this available to the dressage riders as well," says Bernhard Bock, Head of Marketing at BEMER Int. AG, who is in complete agreement with Ullrich Kasselmann: "The young riders are the future of the sport."

Eurodressage is all week in Hagen taking photos of all riders. If you are interested in using out photos for social media or prints, send us an email FIRST.