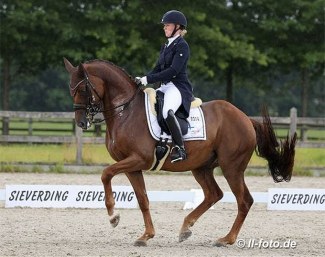 Finnish professional Emma Kanerva and her rising Grand Prix hope Greek Air led a charge of international dressage riders in the Grand Prix held at the CDI Herzlake on 31 July 2021.

A field of 32 riders representing no less than 13 countries was entered for this Grand Prix class held at Gut Einhaus, the equestrian centre owned by discredited Ukrainian entrepreneur Alexander Onyschenko. While the property has been offered for sale in a silent auction and is still listed on the market for a multi-million asking price, several international dressage and show jumping competitions are being held at this beautiful venue since 2020.

At the same time as the world dressage elite was returning home from the 2021 Olympic Games in Tokyo, dressage action continued in Europe this weekend with a CDI in Sint-Truiden (BEL) and a bigger big tour CDI in Herzlake.

Dressage had relocated to a more remote, quieter arena on the show grounds, while the main ring was reserved for show jumping. The weather went from sunshine to a heavy downpour of rain, but most horses were unphased by these altering conditions.

The Grand Prix was judged by an experienced panel of three 5* judges and two 4* judge: Peutz, Baarup, Collienader, Kessler, and Sanders. They were fairly unanimous about Kanerva's ride on her 2020 Louisdor Cup finalist. Emma's scores ranged from 72.609% to 75.000%.

The German based Kanerva edged out another 2020 Louisdor Cup finalist: Daniel Bachmann Andersen on Vivi and Christian Vang-Lauridsen's 9-year old Danish warmblood gelding Marshall-Bell (by Don Romantic x Michellino). The pair braved the pouring rain and became the runners-up with 73.043%

The 2021 CDI Herzlake became an important come back tournament for several horses and combinations.

Danish Anna Kasprzak returned to the CDI ring after giving birth to her second child in March 2021. She steered the 12-year old Fuhur (by Furstenreich x Magnat) to a fourth place with 71.326% and the 13-year old Westfalian gelding Rock Star (by Rockwell x Weinberg) to a fifth place with 71.152%.

The highly talented Blue Hors Zepter (by Zack x Wolkentanz II) returned to the arena after having disappeared for almost a year. The 13-year old Oldenburg chestnut was competed at international Grand Prix level by Daniel Bachmann Andersen, until he decided to leave his employer and Zepter's owner Blue Hors stud in the spring of 2020. The tall gelding then surprisingly move to Andreas Helgstrand to be sold but a sale did not happen. Andreas competed the horse once at national level in Denmark in August 2020 and scored 76.667% with him, but the horse disappeared after that.

Zepter has now returned home to Blue Hors and the ride has been given to team rider Cristian Tudela Ruiz (ESP), who resurfaced in the CDI ring after a five year break and a move from Spain to Denmark, in May 2021. In Herzlake, Tudela rode Zepter to a 22nd place with 66.087%, while he ranked 13th with Blue Hors Zick Flower (by Zack x Romanov) on 67.957%.

Nuxoll made her debut with Bonheur de la Vie in the classic Grand Prix tour at national level in Germany in Redefin in May and scored a whopping 80.100%. At a national show in Hagen in July she re-iterated that performance with another 80.833% in the Grand Prix.

It was interesting to see what this horse would score at international level in front of an experienced, top level panel of judges. In Herzlake Nuxoll and Bonheur finished 11th with 68.522%. With Hanami she was seventh on 69.674%.

A new Grand Prix pair made its debut for Ireland in the big tour: Sorrel Klatzko aboard the 8-year old Westfalian gelding Turbo (by Totilas). They got their feet wet in the Grand Prix and scored 61.891% to place 28th.

Another "old-timer" made a surprising come back at this show: Dutch born Turkish rider Ceylan Avinal on her now 17-year old KWPN gelding Zygrande Le Coupied (by Krack C x Ferro). The duo was absent from the international stage for five years and involved in lawsuit drama that would be food for a television soap opera, involving the rider escaping to Turkey to go into hiding there. The pair unfortunately retired from the Grand Prix.