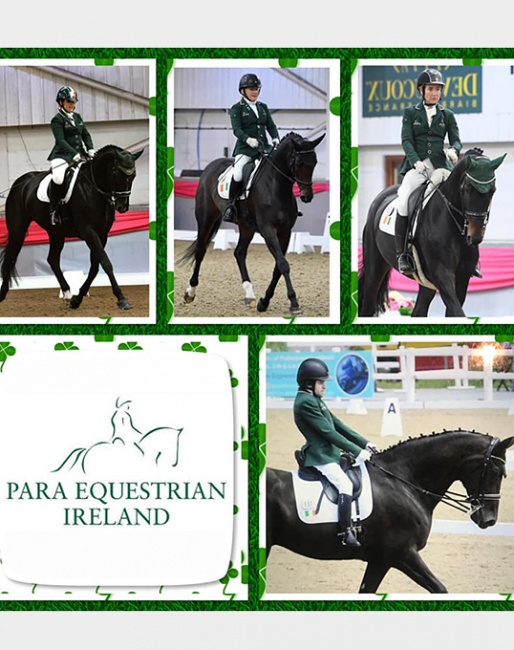 Paralympics Ireland have officially announced the Para Equestrian team that will represent Team Ireland at the Tokyo 2020 Paralympic Games  from 26th – 29th August 2021.

The four athletes will compete in Para Dressage and all four riders will compete at their first ever Paralympic Games. The four-person team and their horses representing Team Ireland will be

Michael Murphy  will compete in the Grade I class on Cleverboy at his first Paralympic Games. Murphy will arrive in Tokyo in superb form having recently hat-trick of wins at Hartpury winning in the team test, individual test, and freestyle against top class oposition. Michael and Cleverboy will begin their Paralympic Games from the 27th – 30th August, in both the individual and team test.

Tamsin Addison is a Grade V Para Dressage rider and will compete at her first Paralympic Games with horse Fahrenheit. Tamsin’s debut will come on the 26th of August in the individual test. Rosemary Gaffney is also making her Paralympic Games debut appearance and she will compete on the 26th August with horse Werona in the Grade IV class. The Clonmel woman narrowly missed out on qualification for London 2012 and Rio 2016. Completing the Irish Para Equestrian team is Kate Kerr Horan from Wicklow, the Grade III rider will compete on Serafina T from the 27th of August in the Equestrian Park.

“I am very excited to take a team to Tokyo! All the High Performance riders have worked hard in the past two years. During the Tokyo selection process all riders showed flexibility and ability to perform and improve, also in difficult circumstances. That it is possible to go with a team now instead of with two individual riders is a great boost for Irish Para Dressage sport. I want to thank all the Irish High Performance riders, Horse Sport Ireland and Paralympic Ireland for their efforts. Without them, sending a team would not be possible. Performing at the Paralympic Games is challenging, and I expect that Tokyo 2020 might even be more challenging because of Covid. However, I believe in the potential and ability of the selected riders and I am confident that these riders will do everything that is within their reach to perform to their potential.”

Speaking about the announcement of the Para Equestrian team that will represent Ireland at the Tokyo 2020 Paralympic Games, Chef de Mission, Neasa Russell said:

‘We are delighted to announce the Para Equestrian team for the Paralympic Games. The four riders have shown good form in recent months. It is brilliant to see all four riders making their first appearances at a Paralympic Games. I would like to wish the athletes and support team the very best in their final preparations before they depart to Tokyo.’