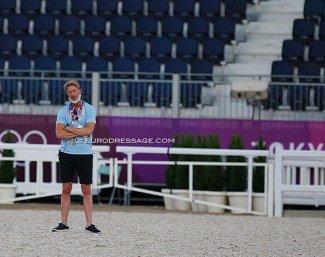 Sweden's number one Grand Prix rider Patrik Kittel has withdrawn his horse Well Done de la Roche from competing in the 2021 Olympic Games in Tokyo. The mare is not fit to compete.

The pair has a bit of a rollercoaster 2021 show season travelling the world to clinch Swedish Olympic team selection.

They flew to the CDI Doha in Qatar, where the mare passed the horse inspection but was withdrawn soon after out of fear for a possible food contamination. Their second show of the season, the CDI-W Mariakalnok in Hungary, ended prematurely as the mare was rung out of the Grand Prix for blood. The pair found their groove again at the CDIO Compiegne, where they bagged a double victory and reconfirmed their form at the CDI Le Mans mid June with another double victory.

They were the highest scoring pair nominated on the Swedish team for the Olympics and counted upon for Sweden to stay in the medal race.

Not Fit to Compete

Kittel and Well Done de la Roche flew to Tokyo with all other dressage horses on 14-15 July. During the ring familiarisation on 21 July 2021 the horse became unlevel. On 22 July Patrik announced his withdrawal from the Olympic team.

"To my sadness, Well Done tripped in yesterday's training," he stated on social media. "A small injury prevents us to compete in Tokyo 2020 Olympics. As I'm broken to the core, Welly will always come first. I will now support my stuidents and team and friends, in the honor to represent Sweden."

"Mine and Welly’s Olympic dream is over," Kittel added. "At the moment I try to hold on and I am grateful to the people that are my friends and family, and support me so much."