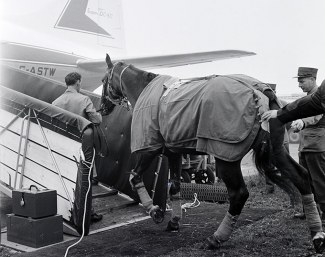 by Silke Rottermann for Eurodressage
This article is a continuation of 1964 Tokyo Olympics: Team Competition in Jeopardy and Dangerous Travels to Tokyo by Air and Sea

Tokyo 1964 were the first Olympic Games for which the majority of horses had to use a comparatively new means of transport to arrive at their destination: the airplane.

A far cry from today’s professional routines and safety, flying horses meant a much higher risk than today. Three horses lost their lives on airplanes back and forth to the 1964 Games.

Eurodressage asked jumping rider Paul Weier, who attended the Olympic Games for Switzerland between 1960 and 1972 about flying horses at that time.

ED: Many horses still travelled to Tokyo 1964 in propeller planes which required several stop-overs for refuelling. The German team chose to fly with a modern jet-plane with just one stop-over. Was the choice of airplane a question of cost or had there been different reasons not to use the faster type of plane on the way to the 1964 Olympics?
Paul Weier: At the beginning of 1964 horses had been transported by jet-planes for the first time. But an American as well as a British airline had to shoot horses because pilots still had not enough experience transporting horses. I guess they started on a too steep rise? So it was probably having more experience with propeller planes that many still chose to fly with them.

ED: Who organized the journeys to Tokyo for the horses?

Paul Weier: There were discussions of the federations with the companies which had the most experience in transporting horses and offered such transports. After these the route to Tokyo and the type of airplane were chosen. Our Swiss federation did not want to risk flying our horses with the new jet-planes and decided to execute the flight with the older DC-6 model. Lloyd provided the plane while the flight itself ran under Swiss Air management. Because of the possible range of this airplane, five stop-overs for refuelling, without unloading the horses, had to be planned. It was calculated that we would have 48 flight hours.

ED: For the majority of horses which competed in Tokyo 1964, it was their first flight ever. Which precautions were taken to make sure they would fly as safely as possible?

Paul Weier: Six weeks prior to our departure we started the decentralized quarantine of our horses, the dressage horses in Berne and the jumping horses at Elgg. During that time mobile transport boxes, which would be used during the flight, were delivered, so our horses could get acquainted to the limited space in which they would be flown later.

ED: Did you all get a kind of briefing directly before the departure in Zurich?

Paul Weier: Only a rudimentary one. But the pilots who flew us were experienced in transporting horses.

ED: Did the horses get a sedative before the departure?
Paul Weier: Very rarely, only for very sensitive horses, who got easily nervous.

ED: Your French horse Satan flew to Tokyo 1964 as well as to the Olympic Games in Mexico City four years later i. If you compare both flights, which changes in the equine air transport could be observed?

Paul Weier: To Tokyo the horses got transported in single wooden boxes which only got screwed tight on the airplane.  We had to load one horse after the other. We transported eight horses and all riders, their grooms and the chef d’equipe accompanied the horses on the same flight.

To Mexico we had real horse containers with space for a maximum of 3 horses in each. It was also possible to transport 2 instead of 3 horses in these containers. The French did that for certain horses so that they had more space. But this of course was more costly. Due to the containers there was a better access to the horses than with the single wooden ones before, but also minimum space for accompanying staff.

Related Links
1964 Tokyo Olympics: Team Competition in Jeopardy and Dangerous Travels to Tokyo by Air and Sea
Paul Weier on FEI Stewarding: "People Should See What is Done in the Warm-Up Ring"