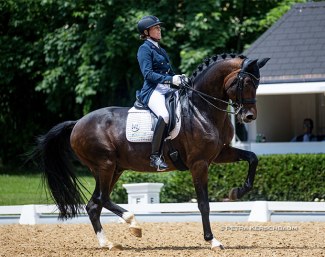 One international competition start in his career sufficed for the 10-year old Baden Wurttemberger bred Topas to catch the interest of the Max-Theurer family and seal the deal. Under Nicole Casper, Topas competed at Max-Theurer's home CDI in Achleiten on 11-13 June 2021 and scored 72.674% in the Grand Prix and 73.809% in the Special.

The licensed Totilas offspring, bred by Martin and Simone Meder out of their mare Fatima (by Sandro Hit) has moved from Gestut Birkhof to Gestut Vorwerk in Cappeln, Germany.

Standing at stud at Gestut Birkhof, Topas was first competed by Nicola Haug. In 2016 Nicole Casper took over the reins. They were regional young horse champions and finished 9th in the 6-year old finals at the 2017 Bundeschampionate in Warendorf.

The Austrian dressage family are regular customers at Gestut Birkhof. They also bought stallion Lord Leopold and mare Pathetique there.