Philipp Freund: "Equine 74 Gastric is an Important Pillar in the Management of Horses" 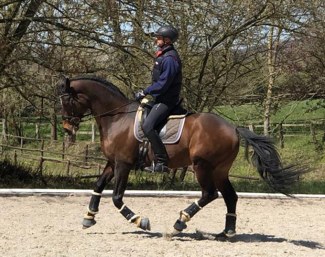 For German professional dressage rider Philipp Freund the feed supplement Equine 74 Gastric has become an important pillar in the management of his sensitive horses.

Sensitive and Yawning While Being Groomed

Freund first tried out Equine 74 Gastric when a lovely 6-year old gelding in his barn showed extreme sensitivity round the stomach area  and was yawning much while being groomed.

"He's a former licensed stallion and has experienced and seen quite a lot in his life already," Freund explained. "It struck me that he was being touchy and yawned a lot while we groomed him. He also struggled with being loose and relaxed under saddle. In addition to  changing his feed, I immediately thought of Equine 74 Gastric. From that day we feed him with it regularly."

Philipp saw a swift improvement in his horse and did not feel the need to experiment with other brands.

"The condition of this horse improved relatively quickly so I did not try anything else. The saying goes, 'never change a winning system'," Freund stated. "After a few weeks the horse allowed us to groom his sensitive belly, his throughness in the body under saddle improved as well as his general rideability. Also his eating behaviour ameliorated overall. The yawning disappeared and now he's overall a very happy and content horse."

Freund first heard of Equine 74 Gastric by reading a testimonial on Eurodressage. It peaked his interest as the product is a safe and effective alternative to treat horses for recurring ulcers.

"I saw a review of the product on Eurodressage and started to investigate and get more information about it," Philipp explained.

Integral Part of his Horse Management

Sport horses often suffer from gastric ulcers and medication, like omeprazole, is sometimes needed for quick relief, but is no long-term solution. Equine 74 Gastric is a natural product which buffers stomach acids instead of just blocking them and it creates a healthy pH- balance in the horse's stomach.

"A second horse that I had in training had similar symptoms, but he arrived poorly fed," Philipp explained. "In his case we did a worming based on a lab analysis, switched to a grain-free feed that is more stomach friendly.  As a prophylactic, I did a three-week course with omeprazole, but also started to feed Equine 74 Gastric, which I kept feeding. I noticed a change in behaviour, in handling, rideability and willingness to perform as well as in the appearance of this horse."

For Philipp the total package of horse care, based on a good feeding system, is vital to the well-being and health of the horse.

"A very important factor for me is that, in addition to the feeding Equine 74 Gastric, there is also sufficient nutrition given through good hay, at least 3 times a day, preferably more often in smaller portions," he said. "I prefer to feed hay 3 to 4 times in smaller quantities than two larger portions."

For Philipp it is totally clear, "for horses with stomach problems, Equine 74 Gastric 74 is a very important pillar in their management."