David Stickland: Nobody is Perfect...but Some are Pretty Close to It 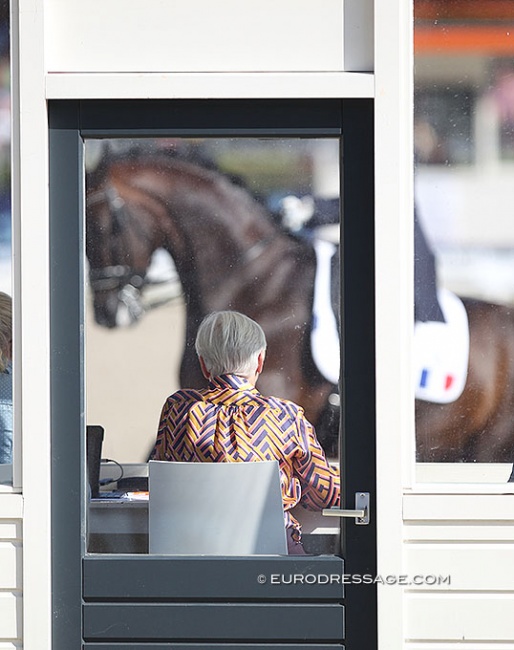 David Stickland of Global Dressage Analytics is a senior Research Phsyicist with Princeton University, who is based at CERN in Geneva, Switzerland, where he works on experiments as the coordinator of beam conditions and luminosity. He is also an avid dressage fan and loves to analyse dressage scores. David has been a regular contributor to Eurodressage for the past decade.

Nobody is Perfect...but some are Pretty Close to It

Dressage as we all know is a complicated business for both athletes involved. Of course, there are some riders who have been at the top of the field for a long time and others who are growing all the time, but what I want to show here is that even at the very top of the field it is rare to be at the top for every facet of the sport and training.

I started with all the results from 2021 Grand Prix and GP Special for each for the 492 combinations that have competed this year so far; and per competition I extract the average for each of the main components, like Piaffe, Walk etc. Then I average those numbers for each of the competitions in which that combination has performed. Here I just show the top 10 for each movement type. Of course, this has been a special year, and not all athletes have performed many competitions, so the statistical sample is not very large

I am indebted to the FEI who have made this analysis possible by the collection of this data and by permitting this analysis.

So, the movement with the highest weight in the Grand Prix Special is the Passage with a total coefficient of 8: 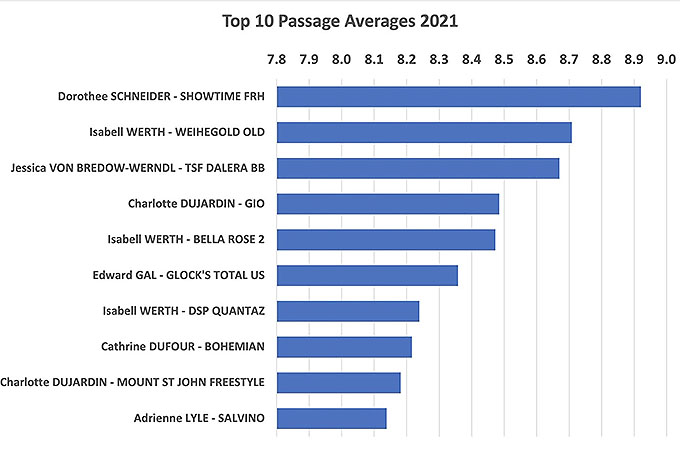 Followed closely by the Piaffe with a total coefficient of 6, but it is worth noting that the spread in Piaffe scores in competition is typically the deciding factor in the overall ranking. 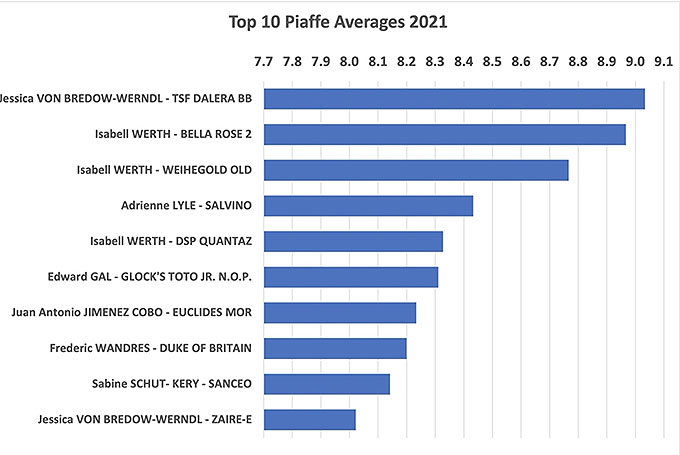 A very different result come for the Walk. Only Benjamin Werndl and Daily Mirror average above 8 if you combine the collected and extended walk score, in their 5 outings of 2021. Interestingly both of Edward Gal’s top horses are high in the Walk ranking. Being a horse at the very top for both Piaffe and for Walk does not seem to be very common. The Walk of course has a total coefficient of 4 in the GP Special. 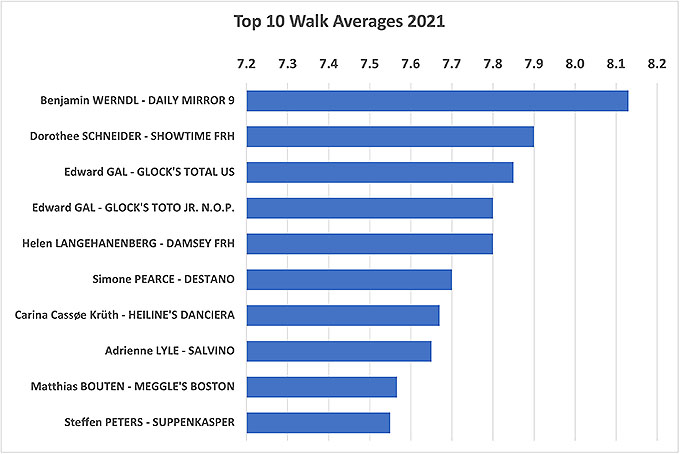 We can also split the Walk into its Collected and its Extended variations. It won’t come as a surprise for anyone that the Collected Walk marks are typically much harder to come by than the Extended. Damsey, who tops the Extended Walk rankings for 2021, scored 2 points less for Collected Walk and Dalera, who has the highest average Final score for 2021 of over 82% (you may want to remember that when making your Tokyo predictions) scores usually more than 2 points lower for Collected than Extended. 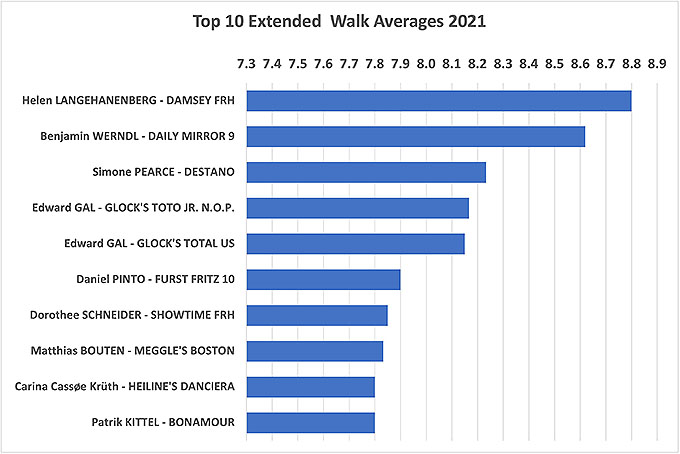 Not  a single combination  in 2021 averages more than an 8 for Collected Walk. 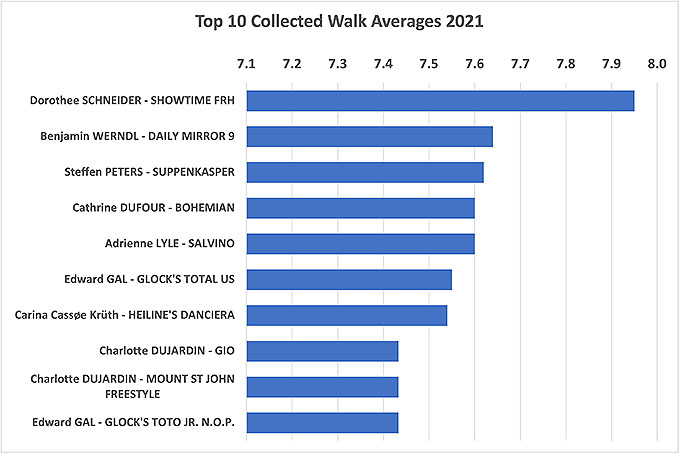 What about the Trot Half-Pass, again a very different group of horses is showing up here:

The Brits have this nailed, with both of Charlotte Dujardin’s top horses and all three of Charlotte Fry’s in the top 10. I have always considered Isabell Werth to be Queen of the Half-Pass, and she is right up there. With a total coefficient of 4, as for the Walk, but with scores well above 8 for the top combinations, the Trot-Half-Pass can be very influential on the final score.

Moving on to the Extended Trot, with an overall coefficient of 3, again a very different group of riders and horses, although Charlotte and Mount St John Freestyle are way out in front: 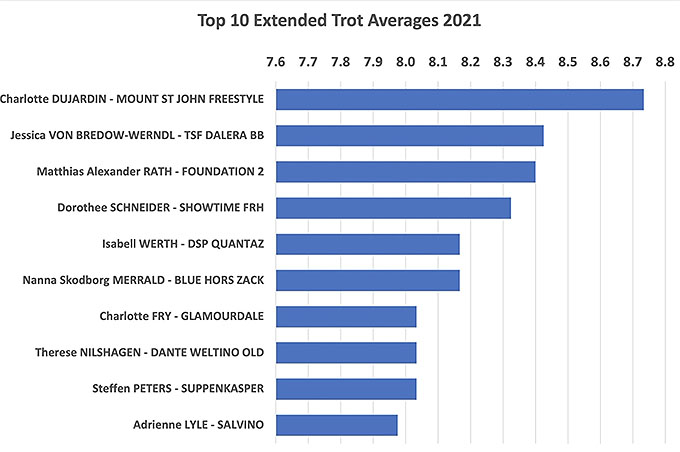 Moving on the Canter movements and the Changes, where I group together the one-tempi and the two-tempi. The Changes have a total coefficient of 3 and these are the movements where a simple mistake can cost a lot of points: 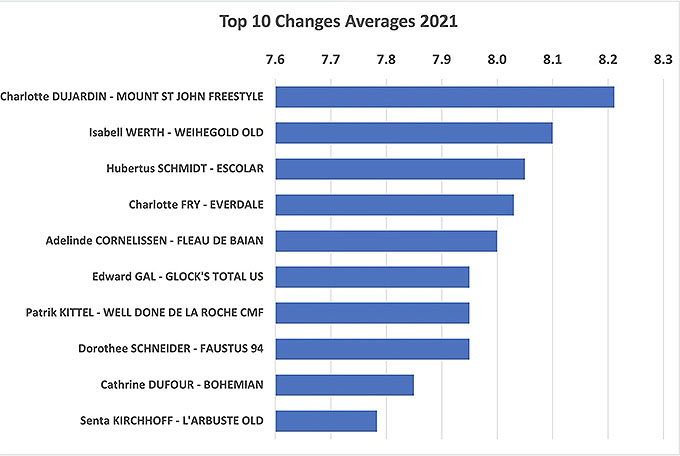 Charlotte and Freestyle are back on top. Interestingly if we take not the average Score for Changes, but the best score in a competition, then it would be Benjamin Werndl with 8.55, but because it’s so easy to lose points in the one-tempi, his average Changes score was just off the bottom of this top-10 chart.

Pirouettes have a total coefficient of 4 and are even more important in the Freestyle where they count heavily in the Degree of Difficulty score also. It’s great, for me, to see Steffen Peters up there in the top 10, it was his Pirouettes with Ravel in the lead up to Lexington that really got me started in this whole Dressage Analysis business! Isabell and Weihegold are really out in front on the Pirouette scores 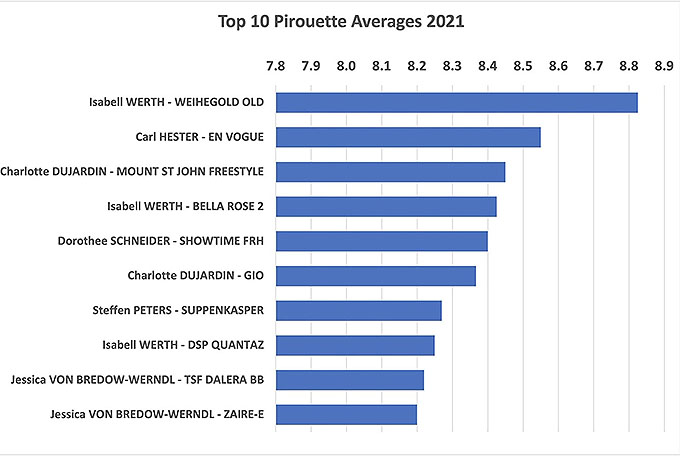 And now the last Canter movements, the Half-Passes, or Zig Zag in the Grand Prix, with “only” a total coefficient of 2 it is the turn of Charlotte and Freestyle again to top the ranking. 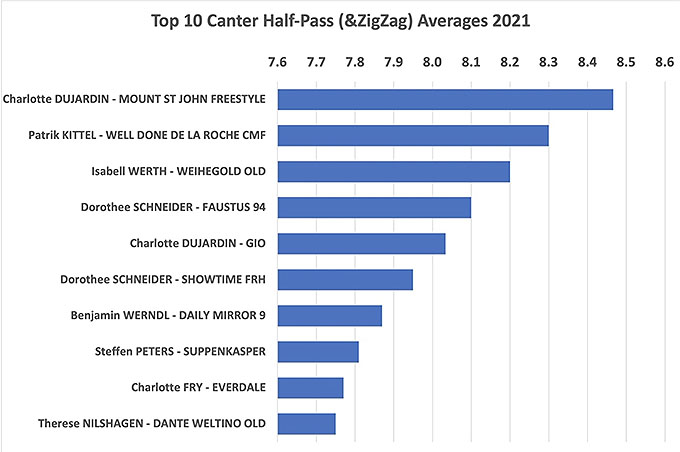 Last, but not least, the Entrance and Final Halts which can be costly and many riders lose a small competitive edge there! 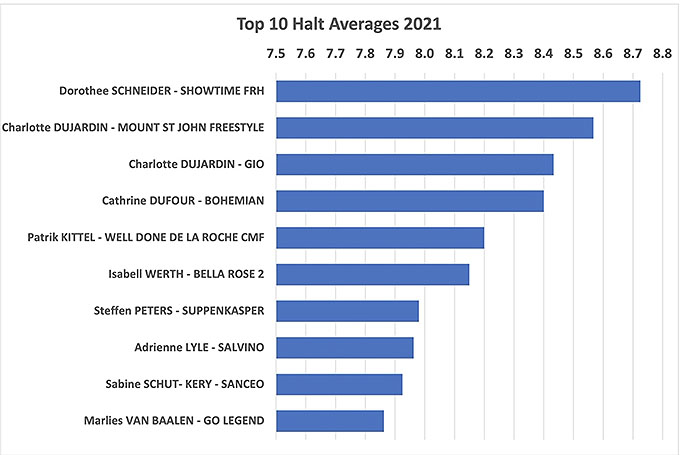 So, what to make of all this? Nobody has the lock on all movements with any single horse; there are rider skills and horse abilities and training difference that affect this all.

For a final summary, take a look at the relative importance of each movement type in the 2016 Olympics, the pizza slices are proportional to the spread in scores for each movement. 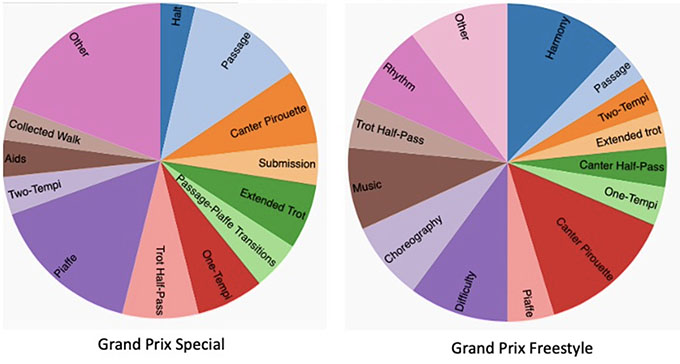 The Piaffes are very decisive in the large competitive field of the Grand Prix and Special, but in the more restricted and somewhat higher-level playing field of the Freestyle, it is the Pirouettes that have the biggest effect on the final ranking.

All figures in this document are copyright © 2021 David Stickland.