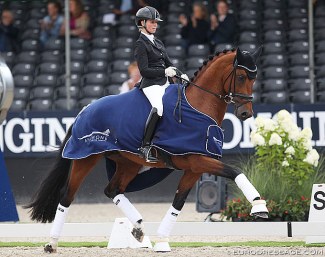 Valverde is a 7-year old Westfalian stallion by Vitalis x Ampere x First Final, bred by Eugene Reesink. He was the 2016 Westfalian Licensing Champion and Reesink sold him to Andreas Helgstrand and Norwegian Cathrine Rasmussen.

Valverde is a highly popular breeding stallion in Denmark and Germany.

Springbank II VH is a 7-year old Swedish Warmblood stallion by Skovens Rafael x De Niro. He is bred by Tobias Hansson at Västra Hoby Stuteri and was co-owned by the Hansson, Kristina Hennix and Helgstrand dressage.

The Swedish stallion was the 2018 Danish Warmblood licensing champion in the 4-year old category. He was also a much used breeding stallion, despite his WFFS positive status.

Reichert made her international show debut at small tour level at the 2018 CDI Munich aboard Shiva (Westf, by San Schufro x Dresemann) and Schwarze Perle (OLD, by Sandro Hit x Rohdiamant). A week later the competed at the 2018 CDI Ranshofen in Austria with Shiva and the then 6-year old mare Damora (WESTF, by Don Juan de Hus x Don Bedo). Those were her only two international show starts, so far.

At national level, Reichert has been competing her horses extensively up to Grand Prix level (Shiva, Schwarze Perle) at regional shows in Bavaria and in Austria.  This year she's been riding Shiva, Damora and Furstin Tausendschön (WESTF, by First Selection x Rifaisos).

Reichert studied Law and Politics at the University of Munich. She is CEO of Wett Star, an horse race betting agency, and is listed as founder of WINunited, a Malta based marketing company for e-commerce (betting) operations. Her husband Oliver Reichert is co-CEO of Birkenstock.