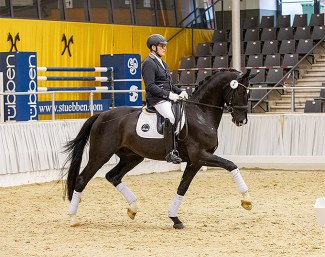 Sympatico, the top seller of the 2021 Hanoverian Spring Elite Auction, which concluded on 17 April 2021, received no less than 105 online bids to sell as the auction price highlight.

The Verden auction online in April developed into a lively market place. Sympatico was auctioned off for 105,000 euro to a dressage trainer from Hessia.

105 bids were placed until Sympatico (by Secret x Don Crusador) sold. Bred by Dr. Elke Standeker in Austria and owned by Swedish Carsten Johansen, the black found a new owner in Hessia for 105,000 Euros. From the first day on, the black three-year-old out of the dam line of Anitschke was the most popular horse in the collection and impressed at each of his presentations with auction rider Heiko Klausing.

Sympatico will be accompanied on his journey by Totilas Erbin (by Top Gear x Benetton Dream) who sold to same stable for 75,000 euro. The gorgeous liver chestnut mare was presented under saddle by Jacob Schenk

Fantastica (by For Romance x Franziskus) sold to Austria for 56,000 euro. Baronderry (by Baron x Londonderr) will also move to Austria, for 67,500 euro.

Buyers from all over Europe and North America appreciated the high-class offer. 36 horses will stay in Germany, 31 have a further journey ahead of them. The average price of 25,634 euro meant an increase of over 3,000 euro compared to the previous year. The largest contingent was bought by customers from the USA (eight horses) followed by France and Spain (four horses each).