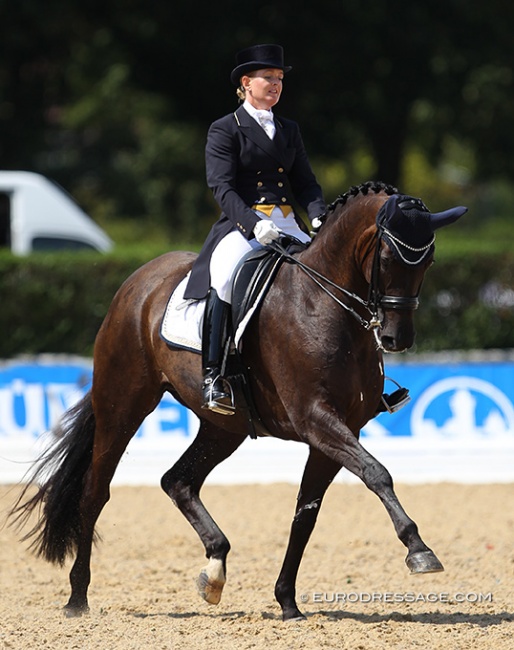 Di Lapponia was a Hanoverian mare by Donnerhall x Argument. She was bred by Joachim Tobaben in Germany.

Paulinda bought Di Lapponia T directly from the breeder as a 2.5 year old.

She was initially a broodmare before being turned into a sport horse at the age of 7.

The combination made its international show debut at Grand Prix level in 2013 at the 2013 CDI Falsterbo, where they were fifth in the Grand Prix.

For eight years they consistently competed at international Grand Prix level, between 2013 and 2020.  Only two rider accidents - Paulinda fell off a horse (2014) and injured her foot (2018) - kept them out of the arena.

Their highlight year was 2015 when competed at the 2015 World Cup Finals in Las Vegas where they were 14th in the freestyle. They were also the first reserves for the European Dressage Championships in Hagen.

The pair represented Sweden on Nations Cup teams in Aachen, Odense, Rotterdam, and Uggerhalne.  At the Swedish National Championships they were 6th in 2014 and won bronze in 2017.

Di Lapponia T was in foal to Totilas and due at the beginning of May. Unfortunately a month ago she lost her foal, a black filly, and foundered soon after. Despite all efforts made the mare could not be saved.

"The umbilical cord was twisted and the filly didn’t get enough blood," Friberg told Eurodressage. "At that moment Lapponia get laminitis and we did everything we could for helping her, but the pain and the X-ray of her hoofs were too much. She was very sad from the loss of her filly. It is and it’s been living a nightmare. We spent 18 years together and the stable is next door to my house. She was a true member of the family."

On social media Friberg wrote, "Heaven has a new star today, probably the kindest one. My heart is broken. I can’t imagine spending my life without you. For eighteen years you’ve been by my side. Our bond was more than a person can ask for."