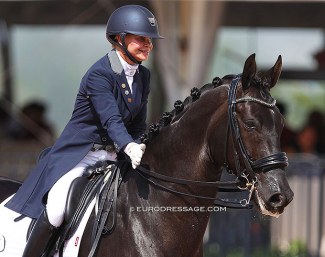 American Grand Prix rider Adrienne Pot had to say goodbye to her number one in the barn, Bon-Ami. He was 15 years old.

Bon-Ami  was by Johnson out of Tavella (by Fidermark) and bred by G. Nijhof in The Netherlands.

Marking His Mark for Sweden

Originally owned by Swedish Philippa Ral of Frösaker Gard, the gelding was competed up to small tour level by his owner from 2011 till 2016.

In October 2016 Bon Ami moved to Germany and the ride was allocated to Swedish Malin Nilsson, assistant trainer for horse dealer and Swedish Olympian Patrik Kittel.

As the combination had drawn the attention of the Swedish Grand Prix team selectors, they got the chance to compete at the CDIO Aachen, where they were 19th in the Grand Prix (70.557%), 11th in the Special (72.294%) and 16th in the Kur to Music (72.450%). They were named reserves for the Swedish team for the 2017 European Championships in Gothenburg.

Based in Barrilington Hills, ILL, and spendinf winters in Wellington, Florida, Pot made her international show debut on the black gelding at the CDI Cedar Valley in Canada. A month later she competed at Caledon CDI.

Pot and Bon-Amir then went on to campaign two more seasons at the Global Dressage Festival in Wellington, Florida, in 2019 and 2020. Bon-Ami last competed in December 2020 at the CDI Wellington, where he placed third in the Grand Prix and fourth in Grand Prix Freestyle.

Their international personal best score was 65.870%.

Unfortunately the just 15-year old Bon-Ami had to be euthanized on 16 March 2021 after a rapid progression of degenerative suspensory disease and laminitis.

“He was a horse of outstanding character and talent and it was a privilege to partner with him," Adrienne told Eurodressage. "I am eternally grateful to the Bramsens for the opportunity to ride such a wonderful horse. I will miss my special friend!”