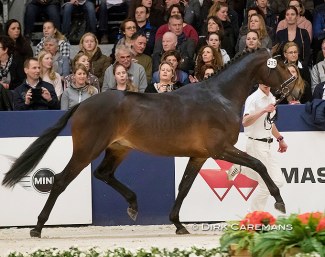 Jambeau is by Apache out of Normiek (by Hitchcock). He is bred by A. van Erp.

Jambeau was the KWPN Foal Champion in Ermelo at the KWPN Horse Days in 2014.

Jambeau moved to Denmark and a month later was licensed at the 2017 Danish Warmblood Stallion Licening in Denmark.

Although he passed the 10-day character observation test after the licensing, he never completed his 35-day stallion performance test in Torring, which he began in the autumn of 2017, but did not complete. He also did not do a KWPN performance test, which means that he was never fully licensed for breeding for either studbook.

Jambeau has never been competed in Denmark, so far.

In January 2021, the Madsen family acquired the gelded Jambeau as a para horse for Line.

In 2009 Line was diagnosed with impaired muscle power at age 18.

The now 29-year old Madsen began her international career as a Grade II para rider in 2016 aboard Alpe d'Huez (by Akinos x Mago xx). In 2018 Honnerups Beebob (by Blue Hors Hertug x Midt West Ibi Light) joined her stable and took her to the 2018 World Equestrian Games in Tryon, where she finished third in the team test, seventh in the individual and sixth in the Kur.

Jambeau is her Tokyo Paralympic hopeful after Korsgaards Toledo got sold.

" I am so lucky to get beautiful Jambeau," said Line. "He is the cutest creature with the mildest temperament. I have only ridden him the last three months, but he is a sweetheart."