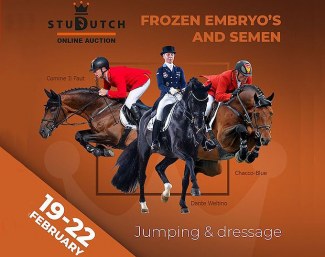 A frozen embryo by Chacco Blue W out of a half sister to jumper Explosion W (by Heartbreaker) became the top selling lot of the 2021 StuDutch Online Auction of Embryos and Semen straws that concluded on 22 February 2021.

A german client paid 24,000 euro for that jumper embryo.

The collection included 16 embryos and 36 semen straws. There was also a small lot of embryos that appealed to a dressage audience.

A frozen embryo by Total U.S out of Jane Esther SVN (half sister to Brother de Jeu) sold for 10,000 euro to Denmark.

A frozen embryo by Dante Weltino out of former international Grand Prix mare Tarina (by Jazz) sold for 8,600 euro and will stay in The Netherlands.

An American paid 3,100 euro for a frozen embryo by Diamond Hit out of Katy Lonka (by Negro).

One straw of Diamond Hit, Briar and Ferro each fetched 650 euro. There was also a straw of Gyula Dallos' Grand Prix from the 1990s, Aktion, on offer. It sold for 650 euro.

One straw from Easy Game (by Gribaldi x Schwadroneur) and Uptown (by Kennedy x Ubis) sold for 350 euro. The Uptown straw goes to France.