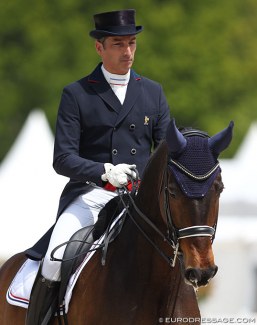 French squad listed Grand prix rider Bertrand Liegard has left his base of 15 years in Belgium to move back to his home country France.

Liegard was originally based at Haras de la Ferme Rose in Belgium, but regularly commuted to the Paris region in France every fortnight to teach and train. He had already built up a clientele there which he retains as he moves to CC Stable.

Bertrand's number one Grand Prix horse in his barn is Star Wars, a 19-year old Luxembourg sport horse registered gelding by Show Star x Rosenkavalier. The rider hopes to compete one more year with the 2021 European Championships in Hagen as target, before retiring the bay.

He recently purchased a successor and 2024 Paris Olympic hopeful in Franz Federleicht, a 2012 born Westfalian by Franziskus out of Popgun (by Paradiesvogel x Sandro Hit x Brentano II).

Liegard has a strong connection to Belgium when he began training with Patrick Le Rolland in 1996. As of 2006 he had his base at Corinne and Walter de Reys' Haras de la Ferme Rose.