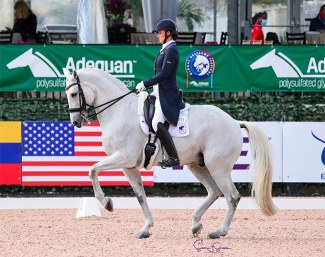 The 2021 Global Dressage Festival kicked off its tenth year at the Palm Beach International Equestrian Center (PBIEC) in Wellington, FL, on Thursday, January 14, with a victory for Adrienne Lyle (USA) and Harmony’s Duval in the Grand Prix for Special.

The first week of competition continues through Sunday, January 17, and the circuit hosts 10 weeks of international and national dressage competition until April 4.

Lyle and the 13-year-old KWPN gelding by Rousseau, owned by Duval Partners LLC, have been dominating in the Global Stadium at PBIEC lately, coming off of a double victory weekend in December.

“I was quite happy with him,” said Lyle of the day’s performance, which resulted in a score of 71.304%. “He’s a little more nervous than I was anticipating. I don’t know if it’s the cooler weather or what, but he was a little on edge, which is interesting because we’ve shown here plenty of times before. There was a bit of a different horse in there today. We lost a few points in our piaffe and passage, were lacking a bit of harmony and elastic energy, and that can be such a highlight for him. Now we take this, and we move on to the Grand Prix Special. That’s a test that really counts for us, but this was a good starting place.”

The gelding has now marked six wins in his last 13 starts, and Lyle hopes to continue on and refine their work this season. “With him,” she explained, “this is his second year at the Grand Prix. He knows his stuff now, but we’ve been trying to polish it all up. We’ve done a lot of halt rein-back, a lot of cantering and halting, [and] just a lot of work with halts because he’s not a huge fan of them, so we’ve worked on those moments where he could possibly get distracted and lose points.”

She continued, “We’re focusing on the Special with him this year. We’ve chosen not to focus on the Freestyle or World Cup Qualifiers in hopes of making the short list to go to Europe with him. We have a wonderful group of owners who are supporting us, and we’ll just keep on enjoying the season for now.”

Despite plenty of training time at home due to the global pandemic, Lyle is excited to have Duval back in competition, and admitted that the break wasn’t as beneficial for him as it was for others.

“We had time to train at home due to COVID, but it wasn’t a big advantage because he is a horse that needs to be exposed, out, and doing something,” she noted. “To sit at home all summer, it was a bit difficult to get his mind back into it, but his strength in the collection work is continuing to improve. His overall rideability has always been the biggest focus with him because he can get a little distracted.”

“I thought it was great that the Harmony Sporthorses were one and two in the class today,” concluded Lyle. “Leslie Malone [of Harmony Sporthorses] was generous in allowing us to purchase Duval when he was young, making it possible for us to bring him along like this.”

Harmony Sporthorses sponsors German based British rider Susan Pape with a string of horses and breeding stallions, whereas Duval was bred by Malone and sold as a youngster.

The Prix St. Georges 1* awarded first place to the USA’s Anna Marek and Felissirana, Alise Carrico’s 11-year-old KWPN mare by Belissimo. Marek and the mare were awarded a final score of 70.323%.

Second place went to Raul Corchuelo (COL) aboard his own Maverick, an 11-year-old Oldenburg gelding by Millennium (69.412%). Karen Lipp (USA) rounded out the top three with her own Infinity, an eight-year-old KWPN gelding by Dream Boy, scoring a 68.353%.