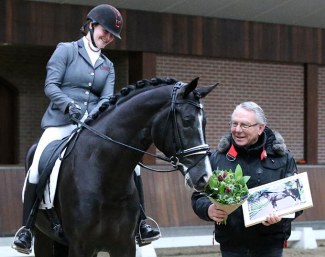 Gorgeous Latino became the high scorer of the 2020-2021 NRPS Stallion Performance Test in Lunteren, The Netherlands, on 8 January 2021.

The NRPS Stallion Performance Testing dealt with some organisation complications due to corona restrictions in Holland. In the end the testing took place over three days (10 September, 15 October, 26 November 2020) and with a final exam on 7 and 8 January 2021.

The high scorer of the testing in Lunteren was Gorgeous Latino (by Toto Jr out of Blackmanda (by Rubiquil x Sultan x Doruto). Bred and owned by Leunis van Lieren and ridden by Thamar Zweistra, the black stallion scored 10 for walk, 9 for trot and canter, 9.5 for rideability, 9 for self carriage, 9.5 for potential, 10 for willingness to work. He totalled 95 points.

Van Lieren celebrated more succes at this NRPS testing. His Gorgeous Black Art (by Toto Jr out of Beauty Vienna D (by Rubiquil x Jazz)) was the second best scoring stallion with 94.5 points in total. Bred by Karin Visser and ridden by the Hungarian Benedek Pachl, this black stallion earned 9 for walk and canter, 9.5 for trot, 9.5 for rideability, 9.5 for potential and 10 for willingness to work.

The dressage stallions that passed the testing are: