Maria Caetano Expands String of Horses with For Jordan and Teutonia 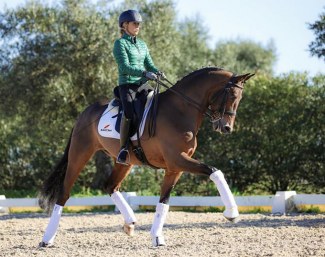 Portuguese Grand Prix rider Maria Caetano has expanded her string of horses with two new additions that were sourced through the PSI Auction from Hof Kasselmann.

The 34-year old Caetano, who achieved her greatest successes so far on the Lusitano stallion Coroado, loves riding Portuguese bred Lusitanos as they bring a touch of home to the saddle. However for her a good dressage horse has no breed and its potential depends on its high quality gaits and rideability.

As a foal he participated in the 2014 German Foal Championships in Lienen. He sold to Hof Kasselmann where he was first started in dressage.

The bay gelding sold as a 4-year old named For Jordan in the 2018 PSI Auction to Colombian Harold Tascon, but initially stayed at Hof Kasselmann.

He made his competition debut in 2019 with the show name "Faceur S" under Pia-Christin Matthes. He showed once in 2020 at the CDN Ankum in February under Valeria Fernandez Palomino, before moving to Portugal.

Caetano received the ride on the Colombian owned For Jordan in May 2020. The aim is to develop him to Grand Prix level.

"He is owned by a Colombian investor, Harold Tascon. He and his family have been friends of mine since I worked at Hof Kassemann," Caetano explained.

"I will prepare and compete him up to Grand Prix level and then he will be the horse for Harold's daughter, Brunella Tascon Silva, so she can make the transition from Under 25 to senior Grand Prix," she continued.

The 22-year old Brunella is the 2019 Colombian National Small Tour Champion and was member of the Colombian team at the 2019 Bolivarian Games on Le Petit Prince R (by Linaro x Rinaldo). They won team earned silver and placed 8th individually.

Brunella is now studying in Europe and plans to start competing in U25 this year.

Her last international competition start was on the Westfalian mare Di Callas (by Diamond Hit x Pheres) at the 2019 CDI Ornago in Italy.

Teutonia is bred by Paul Schockemöhle and was reared at Gestut Lewitz before moving to Hof Kasselmann to be developed. She is by Top Gear out of Fürstin Fantasia (by Furst Romancier x Sir Donnerhall).

The rising 5-year old Oldenburg mare was named after the historic rural area where Hof Kasselmann is located, the Teutoburger Forest. Teutonia sold at the 2020 PSI auction in December to Maria.

"She showed a great ability for collected work and very balanced and light contact, what makes me believe she’ll make it through the Grand Prix in the future," said Maria about her purchase. "I’m planning now to continue her education step by step towards Grand Prix, and probably show her in some Young Horses classes just to give her some competition experience."