Janeiro Platinum, Most Popular Breeding Stallion in Denmark of 2020 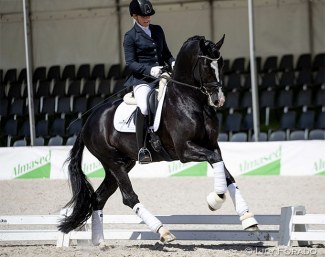 Dutch warmblood stallions are leading the ranking of most popular - meaning most used - breeding stallions in Denmark this 2020 breeding season.

The Danish statistics include a figure of coverings of Danish warmblood mares in Denmark, plus coverings to mares based in Denmark but from other breed societies.

These statistics give a good idea of the popularity of the stallions, but the numbers are not final. As soon as the actual foals are born, it shows that many of the coverings were not yet registered. Normally the total number of breedings/births in Denmark will rise with around 20-25%.

For the second year in a row, Janeiro Platinum (by Sezuan x UB40 x Ferro) has been the most used stallion by Danish warmblood breeders.

Has the corona pandemic during the breeding season had an effect on breeders deciding to breed or not to breed this year?

Janeiro Platinum was owned by Andreas Helgstrand. He sold the black stallion at the end of the breeding season to the Swedish Christinelund Dressage.

It was the first season that the 3-year old stallion stood up for stud and he covered 118 mares. 101 of them within the DWB studbook and 17 outside DWB.

The number five is Blue Hors Zackorado, a German bred Zack x Florencio, who bred to 104 mares in 2020.

Vivaldi, the popular KWPN stallion which Blue Hors stud leased for the 2020 season, ended up covering only 21 mares.

The complete statistics can be seen here.