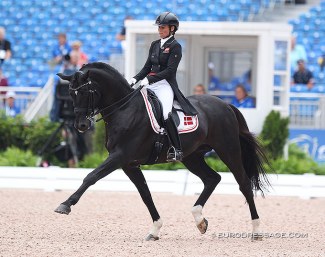 Finckenstein TSF, Rikke Svane's Danish team horse at the 2015 European Championships and 2018 World Equestrian Games, has been retired from top level competition sport and moves to Germany for the 2021 breeding season.

Finckenstein is a 19-year old Trakehner stallion by Latimer out of Fatima XVII (by Kennedy x Marduc x Wie Ibikus). He is bred Karl-Heinz Moll and owned by Svane.

Finckenstein was approved at the 2005 Trakehner Stallion Licensing in Wickrath and did his 30-day performance test the same year in Schlieckau, scoring 8.26 for dressage and 7.46 for show jumping. He initially stood at stud at Gerald Geling's Trakehner stud farm in Dannau/Gowens, Germany.

The black stallion was first competed in 2006 under Markus Waterhues. In 2008 Volker Brassard showed him briefly, then Falk Rosenbauer and then he went back to Waterhues.

In 2008, Finckenstein sold to Danish Rikke Svane and she began competing him in 2009.

The pair made its international small tour debut at the 2012 CDI Leudelange. Svane was based in Luxembourg at the time. They moved to Grand Prix level in 2014 and were fifth at the 2014 Danish Grand Prix Championships.

They represented Denmark at the 2015 European Dressage Championships in Aachen, where they finished 46th in the Grand Prix with 67.586%. They were fourth at the 2015 Danish Nationals. In 2016 the pair performed consistently at CDI's in Doha, Compiegne, Falsterbo, Biarritz, Zakrzow, Madrid, and Salzburg, but were not selected for the Danish team for the Rio Olympics. They were fifth at the 2016 Danish Championships.

The highlight of 2017 was a bronze medal at the Danish Grand Prix Championships. In 2018 they placed seventh at the Danish Championships and were called up last minute to represent their country at the 2018 World Equestrian Games in Tryon, U.S.A, as second reserve, after Dufour and Zibrandtsen withdrew with injured horses. In Tryon they finished 24th in the Grand Prix Special with 70.714%.

Tryon was the horse's last competition in his career.

Finckenstein sustained an injury and did not return to competition sport since then. However, he regained full fitness after a long rehabilitation and served as an invaluable schoolmaster for Rikke's daughter, 18-year old Rebekka, at home.

"Finckenstein will never compete at Grand Prix level again," Svane told Eurodressage. "My daughter loves him and rides him well." Rikke is thrilled that Rebekka has been able to learn from the stallion, who is a treasured member of the family. Finckenstein is "a horse that she has known since she was 4 years old, (that is) part of our family," Rikke added.

At the beginning of 2021, stallion keeper Gerard Geling convinced Rikke to have Finckenstein return to stud duty. The gorgeous black stallion moved to Germany to stand at stud.

"With a lot of patience and persuasiveness, Gerard succeeded in convincing owner Rikke Svene to bring her world class athlete (..) to the stallion station for breeding," Geling posted.