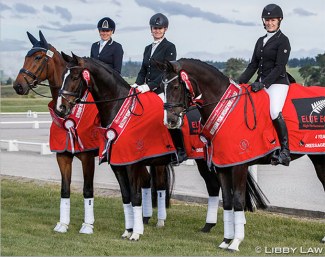 The NZL Young Horse Championships were held on Saturday 21 November at the Taupo National Equestrian Center and one class counted to decide the title in each age category.

Five combinations competed in the 4-year old division and it was Rochelle Speirs on the New Zealand warmblood Feuer Tanz (by HP Fresco x Gymnastik Star) who topped the board and claimed the champion's sash. Judges Hobson and Hughes-Keen rewarded Feuer Tanz with a winning score of 76.2 points. The gelding is bred by Gillian Booth and owned by Julie Brougham and Linda Budden.

The runner-up was Wendi Williamson aboard the 4-year old Hanoverian Danseur MH (by Dancier x Anamour), bred by Matthews Hanoverians and owned by the rider. The duo scored 75.2 points for second place.

Only two pairs contested the 5-year old division, which traditionally in Europe always provides the largest field of competitors. The judges were Cooper and Eivers.

Bred by David Woolley and owned by the rider in partnership with Brooke Hughes, NSC Furst Rock DW scored the high score of the day and won the 6-year old title with 89.4 points.

Jody Hartstone and her home bred Lusitano Jamaica Cruzeiro do Sul, by her imported Portuguese Lusitano stallion Ali Baba out of a Huilco dam, were the runners-up with 75.8 points.