Spirit of the Age OLD Retired from Competition Sport 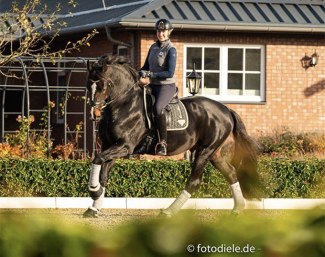 German Grand Prix rider Bernadette Brune has retired her number one horse, Spirit of the Age OLD, from competition sport.

Spirit of the Age OLD is a 16-year old licensed Oldenburg stallion by Stedinger out of Ulta Davenia (by Donnerhall x Rohdiamant). He is bred by Michael Mehrtens

To New Zealand and Back

As a youngster he was reared by stallion owner Gerd Sosath, who sold him Dieter and Martina Brandes.

Spirit of the Age started his sport career with serial victories in the riding and dressage horse tests under Sascha Böhnke.

At the Oldenburg auction in Vechta he sold to Karl Heinz Reipen of Awakino Stud in New Zealand. There he became the New Zealand Young Horse Champion as a 5-year old.

In 2011 Awakino stud sent him back to Germany to be trained and competed by Thomas Rive. Reipen decided to resell Spirit at the 2012 Oldenburg Spring Elite Auction in Vechta, Germany, in March 2012.

Despite a not so successful try-out at the auction centre in March 2012, Bernadette Brune was very intrigued by the stallion and saw his potential as a sales horse for clients due to his exceptional rideability and good behaviour.

She acquired the dark bay stallion for 190,000 euro. Spirit of the Age travelled to Brune's  base in Vidauban in the south of France, where he made his show debut at national level only two weeks after arriving there. Another  two weeks later the pair contested the small tour at the 2013 CDI Biarritz and won the Intermediaire I. It was the beginning of an amazing success story.

Instead of being a sales horse, Brune kept Spirit of the Age for herself.

The pair achieved their first Grand Prix victory one year later at the 2013 CDI Biarritz. Between 2013 and 2019 the pair consistently competed at international Grand Prix level. They represented the German team at CDIO Nations' Cups in Vidauban, Rotterdam, Hickstead, Compiegne and Falsterbo. They won the international Grand Prix in Cappeln (2016) and scored a career highlight double victory in Salzburg. The pair was B-squad listed for Germany. Their last international start was at the CDI Verden in August 2019.

Based on his successes in sport, Spirit of the Age OLD was licensed for the Oldenburg breed society.

"Even though Spirit is doing really well at the moment, I have decided not to show Spirit anymore in competition sport. There are no big shows and nationally we had a nice conclusion with 71%. He gave me everything and I promised myself to never force him to do anything. Now the programme will only be fun."