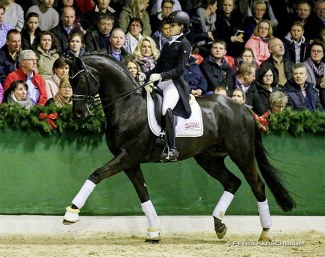 The 18-year old Oldenburg licensed stallion Faustinus has been sold to Romanno stud in Scotland.

Faustinus is by Furst Heinrich out of a Trakehner dam by Starway x Istanbul x Sterndeuter. He is bred by Wilfried Sänger-Horstkott and was owned by Gudula Vorwerk-Happ.

The black made an impression at the 2004 Oldenburg Stallion Licensing in Vechta with his incredibly noble looks. A year later he did his 30-day stallion performance test in Neustadt/Dosse in November 2005 and scored 8.41 for dressage and 8.27 for show jumping. In 2007 he did his 70-day testing in Neustadt/Dosse and scored an index of 143.64 for dressage (1st place) and 117.16 for jumping (5th).

Faustinus initially stood at stud at Gestut Vorwerk, stepping in for First Feroz (by Furst Heinrich x Singular Joter), who was the reserve licensing champion at the same 2004 licensing as Faustinus, but struggled with fertility issues.

At Gestut Vorwerk he was trained and competed by their head rider Tanja Lammers. They made their show debut in August 2005 at a local show in Falkenberg. He was more extensively competed in 2007 as a 5-year old and placed fourth at the Oldenburg Young Horse Championships in Rastede in July 2007. It ended up being the horse's last competition in his career in Germany.

Between 2003 and 2008 Gestut Vorwerk systematically started selling their stallions as the stud got disbanded with no successors taking over in the Vorwerk family.

Faustinus sold to Gestut Sprehe and started drifting around Europe as a breeding stallion. Faustinus stood up for stud at Sprehe, was sent to Sweden for a couple of seasons at the time that Gestut Vorwerk sold to Sissy Max-Theurer in 2009. He was at the state stud Dillenburg for a while and most recently he spent two years at the state stud in the Czech Republic.

Faustinus' most successful breeding time was in his Swedish days. In 2009 he was bred to 85 mares and counted amongst Sweden's most used dressage stallions. He was managed at the time by Stall Waldhof och Bjorkas.

In Germany, Faustinus has 80 offspring registered for sport of which 7 compete at S-level. He has no licensed sons but one state premium daughter.

The 18-year old Faustinus has now been sold to Jennifer Gilchrist, the owner of Romanno Stud in Scotland.

The black stallion arrived in September and joined Hochadel and L’Espoir serving the British breeders' market.