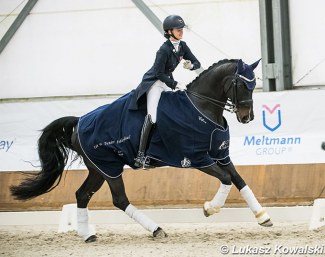 Brand new Czech duo, Tereza Matouskova and Paolo Il Bello, scored a double victory at the 2020 CDI-W Zakrzow in Poland on 22 - 25 October 2020, a remarkable feat for a pair that only has three months of international competition down their belt.

"Terka" and the now 15-year old Dutch Welsh pony Coelenhage's Las Vegas (by Speyksbosch Nando x Ox el Khafif) came from Milou Dees and Van Peperstraten's barn in The Netherlands and was acquired by the Czech family in 2018.

Tereza made her CDI debut in the Children classes on the pony at the CDI Brno in June 2018, but also rode in the FEI pony classes in 2019 with starts in Mariakalnok, Brno, St. Margareten and Zakrzow.

In the 2020 corona year, Tereza moved onto horses at her young age, after acquiring Paolo il Bello from Austrian Franziska Fries in January.

"When I rode him the first time I really enjoyed the feeling on him," Tereza told Eurodressage about her first ride on Paolo. "He is really safe and majestic. He is very good in all three gaits. He also likes cuddling very much, so I enjoy him, also in the times when he's not working."

Paolo Il Bello is a 14-year old Bavarian gelding by Pasolongo out of Sandy (by Legedär II), bred by Germann Vitzthum and originally owned by Alois Antholzer, before the gelding moved on to Fries.

With no international shows hosted in the spring of 2020 due to COVID-19, Tereza qualified nationally for the 2020 European Children Championships in Pilisjaszfalu (HUN) in August 2020. Their European Championship debut, however, was a big disappointment as the pair got eliminated in the team test. It meant the end of their Euro experience

However two weeks later they returned to the arena at junior level, competing at the CDI Brno, where they posted mid sixties scores.

Two months later, the combination seemed to have found their stride at the CDI-W Zakrzow.

"I didn't expect to win, so it was a nice surprise after I saw the results. I was overwhelmed and happy," said Matouskova. "Paolo gave me a very good feeling in the arena. He tries his best every time and is well concentrated. He has a great character for competition."

Tereza has been training with Czech FEI rider Hana Vasaryova at Pelican Dressage Stable for seven months. The junior rider admits that the switch from ponies to horses was not an easy one.

"The transition was hard of course because I never rode big horses before," she said. "Especially the difference between moving around the arena with a pony anda  big horse. With pony the arena looks so much bigger and it feels like you have much more time to do each exercise. With horses it goes so much faster."

Tereza is in her last year at elementary school and will take her entrance exams for high school in the spring of 2021. When it comes to riding, she hopes to learn as much as possible from Paolo, who is trained at Grand Prix level.

"Our plans for the season 2021 is to move to a higher level. Paolo is a Grand Prix horse, so I should take the advantage to learn from him as much as possible," she said. "Of course we hope for more CDI competitions than this year and if everything goes well, I hope for the European Championship."