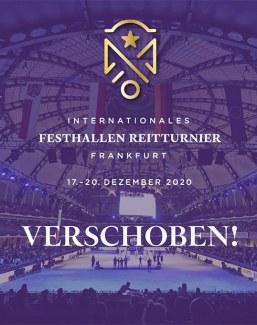 What for weeks has been speculated has now been officially confirmed: the 2020 CDI-W Frankfurt has been cancelled due to corona. The 2020 Finals of the Louisdor Cup, Nurnberger Burgpokal and Piaff Forderpreis will move to Kronberg.

"We worked on creative and unconventional concepts and held many conversations, but unfortunately we won't be able to host an international equestrian competition in the beautiful setting of the Festhalle Frankfurt," said Matthias Rath, show director of the CDI-W Frankfurt and Oceanside Events."

Rath added, "the national and regional measures taken last week to protect us from infection, left us as the organizer of the show no other option than to hold the event in 2021."

In order to ensure that the German Championships for Developing Prix St Georges horses (Nurnberger Burgpokal), Developing Grand Prix horse (Louisdor Cup) and Under 25 riders (Piaff Forderpreis) will take place, Linsenhoff will host the three Finals behind closer door at her own yard, Gestut Schafhof in Kronberg, on the outskirts of Frankfurt.