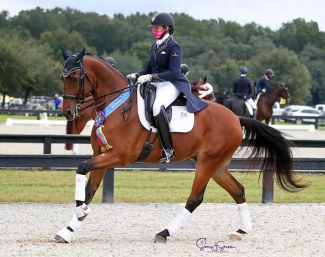 “What an incredible finish to the 2020 show season,” said Meghan de Garay, breeding manager at Iron Spring Farm. “It’s very rewarding to see mare owners like Beth Godwin watching their foals grow into Grand Prix champions. This is every breeder’s dream. Iron Spring Farm is honored to be a part of this.”

Beth Godwin’s Caymus, by Sir Sinclair, Keur, out of Wencenza, by Contango, Preferent, claimed the Region 3 Grand Prix Championship with a 70.380%. Caymus was ridden by Jodie Kelly-Baxley. Caymus and Kelly-Baxley have been confidently moving up the FEI levels over the past few years. In 2017, they were the Intermediate I USDF Horse of the Year. The following year they finished in third place at the US Festival of Champions and were long-listed for the USET. Caymus is Godwin’s second generation homebred. She also bred his dam, Wencenza, a winning FEI horse.

Killian TF, by Uno Don Diego out of Eerste Zarma TF, by Westpoint, continued his winning ways, earning the Region 2 Second Level Championship with a 73.393%. Owned and ridden by Rebekah Mingari, Killian TF was also in the Top Six in the 5-Year-Old Young Horse Final at the US Festival of Champions earlier this year. Killian TF was bred by Kerrin Dunn.

The warmbloods weren’t the only ISF-sired horses bringing home tri-color ribbons. The Friesian mare Zafira MWF, by Meinse 439, out of Wanda of Black Pearl, by Wander 352, won the Region 1 Training Level Championship with a 72.845% and the First Level Reserve Championship with a 70%.  Zafira MWF was bred by and is owned by Sherri and Kyle Garner. She was ridden by Julio Mendoza Loor. Zafira MWF is currently ranked first at First Level in the USDF All Breeds Awards (FHANA) with a 73.727% median score.

Another winning Friesian was Thor, by Teade 392, Sport and out of Leia Z, by Ids 300. The handsome gelding won Region 7 Second Level JR/YR  Championship with rider Kirsten Doss. Thor was bred by Krista and Brad Porter and is owned by Tatiana Kay Harlan.

For all the GAIG/USDF Regional Championship results, as well as the latest updates, photos and videos, please visit Iron Spring Farm.

A range of top Friesian and KWPN stallions are available to North American breeders as part of Iron Spring Farm’s four-decade commitment to the ISF Advantage.

By providing proven bloodlines, along with exceptional service, transparency and impeccable veterinary care, the ISF team helps breeders achieve their sport horse goals. Ongoing expert advice and tools are also available so breeders can develop and market their offspring to the highest level. Iron Spring also offers a select number of talented Friesian and Dutch Warmblood prospects and broodmares for sale.