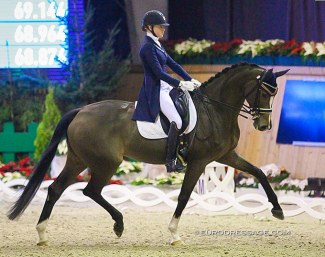 Zoe Kuintjes' Junior-Young Riders' horse Brittsion has been retired from sport and will continue her career as a broodmare.

Brittsion is bred and owned by the Van der Oord family.

The bay originally sold as a foal at the 2004 Prinsjesdag Foal Auction to Dirk Kat for 20,000 euro. Derk Schekkerman trained the mare to national small tour level.

Zoe Kuintjes made her transition from Dutch team pony Elin's Noncisdador to junior level and horses with Brittsion as well as Desperado (by Florencio x Clavecimbel).

The duo rode at prominent CDI's in Aachen, Waregem, Le Mans, Saumur, and Hagen, but did not clinch a coveted Dutch team spot, even though they were nominated as first reserves for the 2019 European Young Riders Championships in San Giovanni in Marignano (ITA).

Kuintjes' last CDI start on Brittsion was in June 2019, after which she continued with Schelstraete's Cupido (by Tuschinski x Goodtimes) in 2020.

Brittsion temporarily became Jade Boots' junior horse at national level and the new pair rode their last show in Wormerveer at the beginning of October.

The mare has now been retired from sport and will continue as a broodmare. Brittsion is out of Unassion, who produced licensed stallions Linvasion (by Sir Donnerhall) and Mansion (by Totilas).