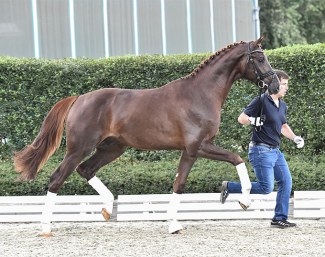 A collection of 10 talented, young dressage colts from Schockemöhle's best bloodlines was offered for sale.

The liver chestnut Go For Romance PS (by Governor out of Furtherance (by Furst Romancier x Sir Donnerhall x Don Schufro) became the best seller of the lot, switching owners for 130,000 euro.  A tough bidding duel between a German and a Danish buyer took place with the former having the final bid.

The second most expensive colt was Franklin's Donnerhall PS (by Frankin out of Furstin Fantasia (by Furst Romancier x Sir Donnerhall x Don Schufro). He sold to Luxembourg for 72,500 euro, with French and Danish customers bidding against.

The bay colt Viano PS (by Vivaldi out of Loxandra (by Diamond Hit x Argentinus) fetched 52,000 euro and will stay in Germany.