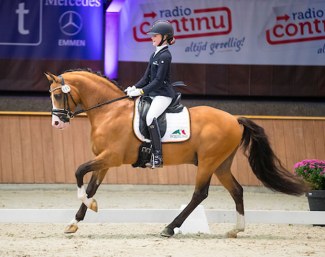 The 10-year old FEI Dressage Pony stallion Cappucino Royale G has been sold from The Netherlands to Sweden to continue his career as a sport pony.

Cappucino Royale G is a 2010 born Weser Ems stallion by Casino Royale K out of Belina (by Bavarottie x Principal Boy). He is bred by Ludger Fühner.

Originally owned by Gudrun Gernholt, the buckskin stallion was approved at the 2012 ZfdP Stallion Licensing, followed by approval for Westfalen and Hessia. He retained his licensed status through competition and a 2-day shortened performance test in Neustadt/Dosse in October 2015.

Although he only briefly stood up for stud, he did produce two licensed sons (Caspar H and Top Champion).

He started his competition career under Gernholt in 2013. In 2014 through 2015 Grunholt alternated the ride with Alina Timpeltey and Jana Greune with a lot of competition starts on his record.

Sold to Holland, Sold to Sweden

The strapping buckskin stallion was sold to The Netherlands as an FEI Dressage prospect for Micky Schelstraete.

The new duo made its national show debut in April 2016 in Heeswijk and competed at E- level that year. In 2017 they won the Dutch Indoor Pony championships at M2-level

The pony made his international show debut at the CDI Exloo in October 2017 and scored between 62-63% under the then 13-year old Schelstraete. It was the pony's only CDI, so far.

In 2018 the pony sold to Dutch FEI pony rider Yasmin Westerink, who competed him through 2019. They were the 2019 Gelderland regional champions at Z1-level.