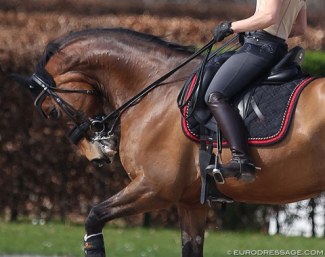 The German ministry of Agriculture has released the new regulations for animal welfare in equestrian sport. Rollkur, hyperflexion, the trimming of whiskers and ear hair, as well as the jumping of foals and yearlings are disapproved of.

The publication of the brochure, explaining the new guidelines, was heavily delayed but has now been made public.

"Not Law, but Expert Advice"

The German equestrian federation announced the new guidelines in a press release, which included an interview with the German NF's secretary-general Sönke Lauterbach.

"The guidelines are not law, but intended to be used as an expert advice," said Lauterbach. "They are expert opinion, independent of individual cases. The guidelines serve as orientation aids and will be used by the justice department and related instance, as well as official veterinarians."

These guidelines were drafted by the Ministry and animal sport associations, including the German NF, as well as Race and Trotting society and recreational riders and drivers society. There were also representatives of the veterinary association of animal welfare involved as well as the German Animal Welfare society. The first version was published 28 years ago, this newest versions is based on three meetings and written correspondence since 2018.

"We are generally satisfied with the result," said Lauterbach. "We are particularly pleased with the clear commitment that horses can be used as our sports partner. There were people questioning that. It is also gratifying that the sport rules remain in the hands of the associations: competition rules, equipment, doping and medication rules. We have succeeded in making it clear that our sets of rules, which are drawn up in cooperation with external, independent experts, are good enough and that we also repeatedly question them in a critical way."

One of the issues that was discussed is that horses can not be stabled for 24 hours and should also have the freedom to move at competitions. However, many competitions do not have the space to set up temporary paddocks and in some cases it would even be dangerous.

"We argued well and achieved the opportunity for a short-term deviation from the guidelines for events," said Lauterbach. "But that does not mean, that the horses are allowed to stand there in the box for 24 hours. We are totally committed to giving horses free exercise every day. At an event, this must be replaced by, for example, lunging, grazing or going for a walk. This is then compulsory in addition to riding so that the horse gets enough exercise at the event."

The biggest discussion for the new guidelines was the age of the horse at which it can begin training. Especially the racing association opposed as they start their horses at a very early age and did not want to agree to raising the age limit.

The consensus is that as of 30 months a horse can begin training.

This also means that breeding associations will need to rethink their stallion licensing concept. The big German licensings are held in October and November of each year when horses are supposed aged 2.5 years old. However some of them appear at the licensing, after a full summer of training, aged 29 months.

"The breeding division of the FN and our breeding associations are currently in the process of rethinking the licensing and preparation system with regard to preparation, preselection, duration and intensity in light of the new guidelines," Lauterbach stated.

The guidelines are very clear in condemning training methods such as rollkur, hyperflexion as well as the tying up of horses in their stall. They consider it "tierschutzwidrig" which means unfavourable or adverse to animal welfare.

"It is also against animal welfare to tie up horses in the stable, during transport or on the transport vehicle, as well as outside of training and/or without permanent supervision. The use of side reins on the treadmill or in walkers is disapproved of."

Auction houses often photograph foals jumping over a pole on the ground, but this is against animal welfare according to the guidelines

"Training of free jumping should be fitting to the age and it is not development appropriate for foals and yearlings and therefore, against animal welfare"

It is against animal welfare to compete or ask sportive achievements of a horse with a neurectomy or with an inserted tracheal cannula. Unfortunately neurectomies often carried out on horse tails by western riders or on horse's legs for competition riders to hide lameness.

"It can lead to pain, suffering and damage," the guidelines say.

The guidelines re-iterate the already existing rule in Germany that it is forbidden to cut the horse's whiskers or trim the hairs un the ears, as well as shave the hairs at the coronet.

The complete guidelines can be read here (in German).