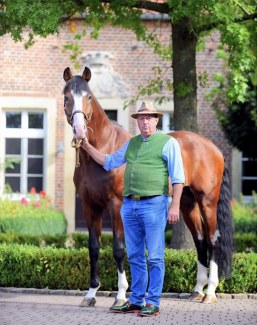 The 10-year old Westfalian licensed stallion Farbenspiel has joined the Thurengeti breeding project and will be breeding in the wild as of now.

Farbenspiel is a 2010 born Westfalian stallion by Florenciano out of Daressasalam (by Dimension x Faisal x Sudan xx). He is bred by Andrea Wilms

The bay colt became a premium licensed stallion at the 2012 Westfalian Stallion Licensing and sold to the Warendorf state stud.

He was first competed as a 4-year old by Anja Wilimzig and placed fourth at the 2014 Westfalian Young Horse Championships in Munster-Handorf.

In 2015 he  was 8th in the consolation finals of the Bundeschampionate for 5-year olds.

Wilimzig continued to train and compete him through M-level until 2017.

Sold at Auction as a 7-year old

At the 2017 Westfalian Autumn Elite Auction, Farbenspiel sold as second most expensive horse of the  auction for 120,000 euro to Viola Fehlings.

In 2018 the bay did his first S* level class at the CDN Ankum, which he won, under Charlott-Maria Schurmann. The pair competed at two more shows, once in Ankum in March and one more time in a Prix St Georges at a local show in Lastrup in April 2018.

"Due to an injury he will now spend the rest of his life in freedom," the Warendorf state stud announced.

The Thurengeti project is led by Crawinkel mayor Heinz Bley and had been running for twenty years.  German bred sport horses live in total freedom in a natural reserve of 2500 acres. At the moment there are 700 horses and 700 cows living in blissful freedom and peace in the wild on this lush land in East Germany.