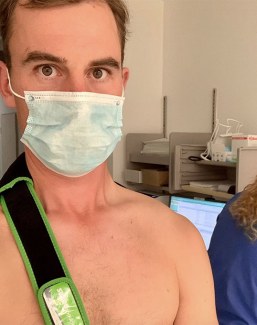 Benjamin Werndl fractured his collar bone in a segway accident at the 2020 German Dressage Championships in Balve on Saturday 19 September 2020.

The Aubenhausen based rider has been competing two horses at the German Nationals. Aboard Flora Keller's 16-year old Westfalian Daily Mirror (by Damon Hill x Florestan) he was fifth in the Grand Prix (77.780%) and fourth in the Special (78.431%), well on the heels of bronze medal winning Dorothee Schneider on Faustus.

On Saturday evening, a fun exhibition game was held at the Nationals in Balve in which riders had to ride a segway. Unfortunately, the 36-year old Werndl crashed with his segway and fractured his collar bone. Not only will this sideline him from riding for a while, but it also meant the end of his 2020 Championships as he was unable to ride the freestyle on Sunday.

"It was in fact a brilliant day," Werndl posted on his social media. "Jessica became the sensational German Champion and I was fourth with a new personal record on Daily Mirror (and Famoso also went mega well). And then I break my collar bone."

Segway, a two-wheeled personal transporter, ended production of its namesake vehicle on 15 July 2020.  The Segway PT, popular with tourists and police officers but perhaps better known for its high-profile crashes, was invented by Dean Kamen in 1999.  Ten months after buying the company in 2009, British self-made millionaire Jimi Heselden died after the Segway he was riding careened off a 30ft cliff not far from his country estate at Thorp Arch, West Yorkshire. Read more