Look Who's Back: Lordswood Dancing Diamond 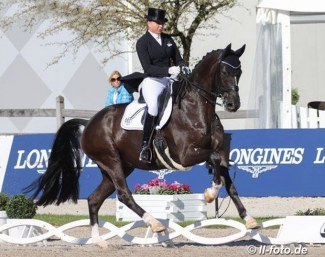 Look Who's back: Lordswood Dancing Diamond, the 2017 World Young Horse Champion in the 6-year old division!

For three years, the now 9-year old Hanoverian gelding by Dancier x Wolkenstein II disappeared from the show scene after his acclaimed victory and gold medal at the 2017 World Championships in Ermelo.

Medalist in Warendorf and Ermelo

He was originally owned by the British duo Alice Whitefield and Heather Stack, who had acquired him as a 3-year old.

In 2017 Pohlmeier and Dancing Diamond crowned their four-year partnership with the world champion's title in the 6-year old division in Ermelo after scoring a stunning  9.72 point result.

Dancing Diamond sold ten months after his 2017 Ermelo victory to a new rider.

The Brits did not want to disclose the name of the buyer, but stated that the new combination would stay under the care and training of the horse's long-time rider Anne Kathrin Pohlmeier, the news soon came out that German Under 25 rider Tamara Rehnig had purchased the horse.

Rehnig and Lordswood Dancing Diamond only competed twice in Germany.

They made their show debut at a local show in Dorsten on 8 September 2018 and two weeks later also competed in an S* class in Darmstadt. Since then the horse has not been shown.

At the 2020 German Dressage Championships in Balve today, 18 September 2020, Lordswood Dancing Diamond made a big return to the arena under Rehnig's new trainer, Dorothee Schneider.

Schneider and Dancing Diamond competed in the warm up test for the 2020 Nurnberger Burgpokal qualifier and placed fourth with 71.829%.