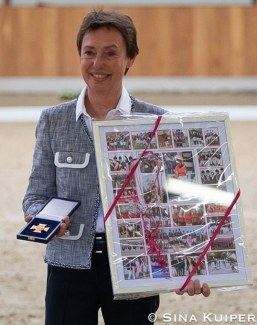 German dressage officials Kerstin Holthaus and Cornelia Endres were bestowed with the German Riders Cross in silver and gold for their lifetime achievements.

Both personalities received their distinction at the 2020 German Youth Championships in Riesenbeck on Sunday 13 September 2020.

Judge Kerstin Holthaus received the Riders Cross in silver for her 16 years old duty as dressage director of the German Youth Department of the German Equestrian Federation. She is also chair of the dressage of the Youth Dressage Selection Committee at the DOKR.

Cornelia "Connie" Endres received the Riders Cross in gold for no less than 40 years duty as German pony team trainer. She will be retiring at the end of the year and be succeeded by Caroline Roost. Endres began working for the German Equestrian Federation in 1977 and has been a team trainer since 1980. She scored 64 gold medals, 42 silver medals and 33 bronze medals with her German pony riders.