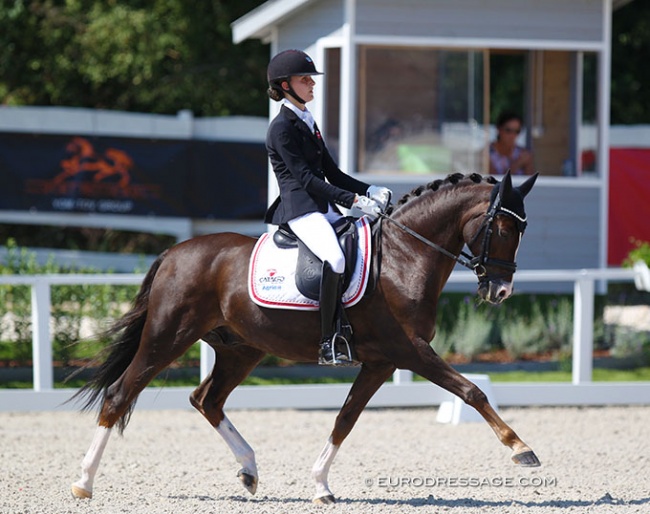 D'Artagnan, one of Denmark's most successful team dressage ponies, has been sold to Germany.

D'Artagnan is a 12-year old Weser Ems bred gelding by FS Don't Worry out of Chansonnette (by Viktoria's Colano x Constantin). He is bred by Schartmann and Litmeyer.

The liver chestnut made his first claim to fame when he got licensed as a breeding stallion at the 2010 Weser Ems Stallion Licensing in Vechta.

He has three full siblings: Coole Socke, Don Mikado and Dancing Diamond and one offspring is registered for sport in Germany.

D'Artagnan's sport career started in Germany in 2011 when he was shown once by Juliane Kraus at a local show in Adelebsen. He was owned by Heiko Scharf at the time.

The pony was castrated to be focused on sport and sold to Denmark to become Kristian Würtz Green, whose parents own the training and breeding stable Stutteri Schuberts.

The new duo made its international show debut at the 2016 CDI Stadl Paura in Austria and went on to compete at the CDI Odense and Hagen that year in an attempt to qualify for the Danish team. Wurtz Green was in the fortunate position to have two FEI ponies to ride and was selected on the Danish team with his other pony, Lilo L, for the European Pony Championships in Vilhelmsborg.

He continued to compete and score well on D'Artagnan in 2017, showing at the internationals in Aalborg, Uggerhalne and Hagen, but again it was Lilo L who took the honour of going to the Europeans.

D'Artagnan sold to Danish Liva Addy Guldager Nielsen after the 2017 Europeans and the pony finally rose to prominence.

The new pair made its international debut at the 2018 CDI Nieuw en St. Joosland and went on to compete at the CDI Uggerhalne. They did not yet meet team selection, but at the 2018 Danish Nationals they were fifth.

The combination truly found their stride in 2019 and after starts in Joosland, Uggerhalne, and Hagen were selected on the Danish team for the 2019 European Pony Championships in Strzegom, Poland, where they won a historic team gold medal and two silver medals in the individual test and kur to music. They topped of the 2019 season by winning the Danish Pony Championships.

In the 2020 corona year, Guldager Nielsen and D'Artagnan were again a fixture on the team and rode to team silver at the Europeans in Pilisjaszfalu (HUN), while individually they were fifth and seventh this time

D'Artagnan has now been sold to the rising 13-year old Veronica Pawluk, who holds dual citizenship in Germany and Poland.

For the past three years Pawluk has been training with Tara Schneider at Gut Römerhof, where Schneider and her assistant Linda Weiss have specialized in training pony and children riders up the levels.

Pawluk is riding the 7-year old Golden Diamond W (by HET Golden Dream) and made her L-level debut in July. One month later she won the 2020 Rhinelander Developing pony rider championship with 8.5 and 8.7.  The Pawluk family purchased D'Artagnan as a second iron in the fire and well trained schoolmaster

"We choose Danny because besides his charming character, his good basic gaits, he is a very correctly trained pony which will help Veronica to develop a light, classical style of riding," Veronica's trainer Tara Schneider told Eurodressage.

Pawluk will take it slow with D'Artagnan and give him the necessary holiday from the European Pony Championships as the two get to know each other.

"With Golden Diamond the goal is to compete in the first FEI classes soon, but with Danny we are not in a hurry," Tara added. "They are just about to get to know each other and he gets his deserved rest after the European Championships. Veronica will take him to clinics this autumn and train the FEI test in some Test of Choice classes. After we know him a bit better, we will decide when they will have their competition debut."