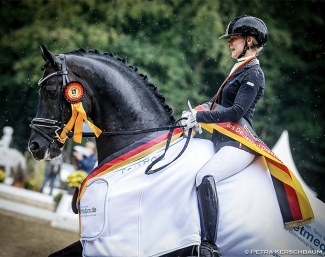 BuCha in a Corona Year

The 2020 Bundeschampionate are one of the few major equestrian Championships still being held in Europe in this corona pandemic year. The 2020 edition of the German Young Horse Championships are run in a different format, spread out over two weeks and no audience allowed. The show rings have been relocated to the main stadium.

While this is a brave effort from the German equestrian federation to rescue on the most important horse events of the year - for breeding and horse sales - the lack of audience and atmosphere is heightened even more this year by horrible weather. The first three days of competition have been dampened with ceaseless, torrential downpours of rain. It also did not stay dry for the 6-year old dressage horse finals, even though the sun came through for a few of the rides.

Secret is one of Germany's most hyped and talked about young stallions. Bred by Hubert Vogler, he was licensed in a private, home licensing, then gained a full book of mares in his first year at stud based on a 10 second video spread on social media. He has only been extremely lightly competed, a qualifier here and there and that is it. In 2017 he lost the Bundeschampionate title to Finest Selection, in 2019 he lost the World Young Horse Champions title to Jovian.. The impressive black beauty has always played a key role in the few competitions he did and today was his shining moment. He got the gold and the title at the 2020 Bundeschampionate.

As the winner of the warm-up round with an 9.2., Eckhard Wahlers' Secret (by Sezuan x St. Moritz) was the hot favourite in the Finals class. His biggest rival would be Eva Möller on Andreas Helgstrand and Cathrine Rasmussen's Dutch bred and Westfalian registered Valverde (by Vitalis x Ampere), who scored 9.0 in the warm up round. With a mistake in the flying changes Secret left the goal wide open for Valverde to score the goal, but it did not happen.

Jessica Lynn Thomas and Secret are a combination that really is a pleasure to watch. The stallion is obedient, is tuned into his rider and Thomas sits quietly in the saddle. It looks all very harmonious and smooth and the stallion's impressive front with a lot of knee action is spectacular to watch and easily to convince people over, but at a technical level there are a few ifs and buts.

In the finals, Secret's trot work was very cadenced and flowing in the voltes and traversal movement, but the extensions were all ridden quite conservatively with little ground cover (yet a lot of scope in front). The shoulder in left could have been more clearly on three tracks, and the hindquarters trailed a bit in the half passes. Overall you wished for a bit more forward push instead of a slowed down collection. The extended walk was excellent with good relaxation, stretch and rhythm, but in the collected walk he became totally lateral. The quality of walk got a bit better in between the turns on the haunches, but then was lateral again before strike off to canter. Secret has a huge canter stride, but could be more uphill oriented with the nose out instead of curled in. He also dove downwards in the flying changes. The third one was in two phases and the fourth one very crooked with the hindquarters swinging to the right. The counter canter, on the other hand, was outstanding with a lot of balance already for a 6 year old. Thomas did a wonderful job presenting the horse in a very pleasant, sympathetic way.

The panel of judges - consisting of Fuss, Holthaus, and Lorenz - were thrilled. Speaking to the public, the panel said that Secret is a "really nice dressage horse, impressive with the cadence in his gaits and in his expression." The rider "succeeded to show the natural cadence of the horse in the lengthenings, but there could have been a bit more stretch." The lateral walk they phrased as being one with "a small insecurity before the walk pirouette." The judges believe Secret has a "very good uphill tendency", "sometimes a bit tight in the neck" and in the last flying change there was "minimal swaying" in the hindquarters.

Kira Soddemann and Señor Charming  made a stellar surge on the leader board to finish with unexpected silver medal.

In the qualifier for the finals Soddemann and the liver chestnut Westfalian (by Stanford x Furst Piccolo) landed only 32nd place with a 7.4 total score. Submission issues made the score tank, which meant that they were sent to the consolation finals for a second chance. The pair improved and finished fourth with 7.9, ending up in the finals as the horses with the three highest scores in the consolation class are eligible to go one round further.

In the Finals, Senor Charming put his best foot forward and enthused the judges panel with his solid quality gaits and impeccable behaviour. He got 9 for trot, 8.5 for walk and canter, and 9 for submission and general impression to get the silver with an 8.8 total.

Yvonne Kläne and Sissy Max-Theurer's Westfalian mare Eyleen (by Escolar x Laurentianer) qualified directly for the finals by finishing third in the warm-up round with an 8.3 score.

The duo upped the ante in the Finals and gave it their all. They were rewarded with 8 for trot, 9 for walk, 8.5 for canter and 9 for submission and general impression. They landed a third place with  an 8.70 total

Eva Möller and Valverde had all the cards in hand for a full house after Secret had a mistake in the flying changes. Despite his experience and routine, Valverde showed he is a young horse after all and not flawless.

Valverde has massive list of achievements to his name already: he is the quadruple Westfalian Young Horse Champion, the 2018 Bundeschampionate silver medalist and the 2019 Bundeschampion, and he was fourth at the  2019 World Championships for Young Dressage Horses in Ermelo.  In Warendorf today it was back to fourth place with an 8.5 total.

Möller rode a strong trot tour in which the horse went fluently and energetically through the voltes and traversal movements, but overall he needed to be more open in the throat latch as he regularly dropped behind the vertical. There was a nice, relaxed extended walk, but there could have been a bit more impulsion in the left turn on the haunches; the right one went smoother. The stallion kicked to the spur and changed behind in the half circle in medium canter, but overall showed good balance and ability to collect in canter. He then changed behind before the third flying change and become more tense throughout the canter work. The left extended canter a bit flat with no real lengthening of the frame and then he dropped out of the left canter to poop. All the flying changes were secure though.

The judges said that Valverde is a "highly talented horse" with a "trot that is super energetic" and with "powerful trot extensions." The walk is  "secure in the rhythm, there is good striding, and the canter is clear in the 3-beat rhythm and shows his ability to collect, but he tends to get a bit croup high."