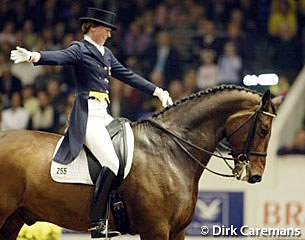 Amando, a former international Grand Prix horse of Gina Capellmann-Lütkemeier and her daughter Fabienne, has passed away. He was 30 years old.

Amando was a 1990 born Swedish warmblood gelding by Amiral out of Erbella (by Indus x Variolo x Largo). He was bred by  Susanne Hall.

Purchased by the Capellman family as an 8-year old in 1998, Amando was first a small tour horse for Gina's sister Nadine. She rode the bay at national shows in Mannheim and Bad Salzuflen.

In July 1998 Gina made her show debut on Amando at a local show in Vlotho-Exter and since then the Swedish gelding became Gina's most successful dressage horse in the 2000s.

The pair was B-squad listed at the time.

In the summer of 2007 young rider Fabienne Lutkemeier took over the ride on the horse from her mom as a Grand Prix schoolmaster.

They made their national show debut at Grand Prix level at the regional show at Gestut Duvelskotter in Einen, after which they entered the 2008 German Piaff Forderpreis show circuit for Under 25 riders.

At the 2008 Piaff Forderpreis Finals in Stuttgart they were 6th.

Fabienne and Amando showed through July 2009, their last show being a local eventin Wickrath, where they were 5th in the Grand Prix.

Amando was retired from sport in the summer of 2009 and since then enjoyed a happy retirement in the field.

"For our family he was really special, because both of us had great success with him," Fabienne told Eurodressage. "He always wanted to do his best. He taught me to give the right aids and I’m very thankful that I could learn so much from him. He really knew what he wanted and told that to us without misunderstanding. He was a real family member as he was with us since he was 8, so for more than 23 years: 11 years of sport and 12 years of happy retirement."