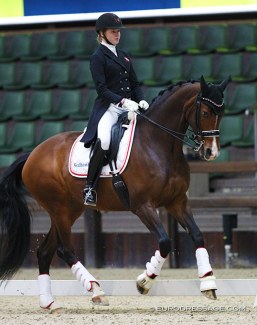 The Danish equestrian federation announced today that Alexander Yde Helgstrand and Frederikke Gram Jacobsen have been selected on the Danish junior team for the 2020 European Youth Championships in Budapest.

Danish youth team trainer Dennis Fisker has already made an early decision on these two junior riders. The other team members, as well as the reserves, for the junior team and the pony and young riders team will need to wait until 21 July 2020.

Alexander Yde Helgstrand has been nominated on the team following winning results at the 2020 CDN Hjallerup at the beginning of July as well as scored achieved at national shows in January and Febriary. Helgstrand, who is the 2019 European Pony Champion, made his official transition to horses and junior level in 2020. With his father being one of the world's biggest dressage horse dealers, he has plethora of horses to pick and choose from. The young man has been competing no less than three horses at junior level: Fiorano, Grevens Sa Va and Santiago.

Frederikke Gram Jacobsen is return team member with her 10-year old Danish warmblood mare Ryvangs Zafina (by Zack x Come Back II). The pair won team bronze and finished 10th in the Kur at the 2019 European Junior Riders Championships in San Giovanni in Marignano. In February 2020 they competed at the CDI Lier right before the corona lockdown. They won the team test with 72.172%.

”I’ve seen both Alexander and Frederikke with compelling results in the latest competitions so I was sure about them,” Fisker told Eurodressage. “Due to corona many of the other riders haven’t been competing, but I will know the rest by the beginning of the next week after our team training Thursday, (the CDI) Hagen on Friday and the pony riders in Sundeved Saturday.”