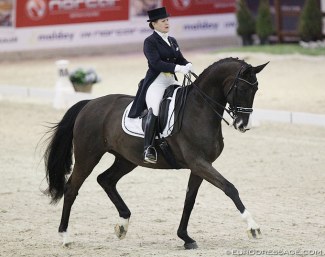 Russian Elena Sidneva has lost her rising Grand Prix horse Sacura. The 8-year old mare developed a colic at the 2020 CDI-W Mariakalnok this weekend and could not be saved.

Sacura was a Hanoverian mare by San Amour out of Donna Daria (by Don Frederico). She was bred by Gesa Coordes and owned by Sidneva in partnership with Vladimir Tuganov.

The black mare made her international show debut at junior riders level in 2018 under Russian Ekaterina Dubrovina. She competed her at CDi's in Wiener Neustadt, Achleiten, Brno, and Leudelange through the spring of 2019.

In 2019 Sidneva campaigned her number one Grand Prix horse Fuhur and became a shooting star at the European Dressage Championships in Rotterdam, after which the horse sold to Danish Anna Kasprzak.

Sidneva immediately took over Sacura and first competed her at the CDI Fot at small tour level in September 2019 and one month later rode her at the CDI Zakrzow in Poland.

Sidneva premier the still 7-year old mare at international Grand Prix level at the CDI Lier in February 2020, where she was 25th in the Grand Prix and 10th in the Special.

This weekend, the Austrian based Sidneva took the now 8-year old Sacura to the CDI-W Mariakalnok, the first CDI on the 2020 calendar post corona. They were 12th in the Grand Prix for Kur on Friday with 65.696%. They did not ride the freestyle as the mare developed a colic. Unfortunately she could not be saved.