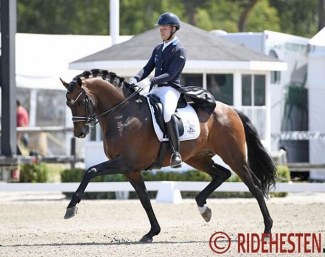 Gammelenggårds Zappa is by Zonik out of Aparte Foldager (by Akinos x Astaire x May Sherif). He was bred by Nanna Voss Jonsson.

Zappa was purchased by the Swedish based Danish couple Patricia Florin and B. Lausten at the Danish Warmblood Elite Auction in 2012 for 12,470 euro (93,000 DKK).

In 2016 the stallion was approved for Danish breeding at the Danish Warmblood Late Licensing, as well as for the Swedish Warmblood society through the 2016 SWB stallion performance test.  He became a popular breeding stallion in Sweden with now more than 100 offspring registered to his name.

Trained and competed by Florin's in-house rider Jacob Nörby Sörensen, the stallion finished 14th at the 2016 Danish Young Horse Championships as a 4-year old, but since then only competed at national show in Sweden.

In 2017 the Danish Jacob Nörby Sörensen tried to get Zappa selected for Sweden for the World Young Horse Championships in Ermelo, but did not make the final cut due to nationality issues of the rider. The pair placed fifth in the 5-year old national young horse class in Falsterbo.

In 2019 he was entered for the Danish team selection trial, but did not make it either. At the 2019 Falsterbo horse show he placed 7th in the national 7-year old division.  The horse is yet to make its debut at an international dressage competition

In April the owner and rider announced that Zappa was "sold to a talented rider" but the whereabouts of Zappa were kept secret.

Eurodressage discovered that the stallion sold to the Swiss company K Spirit AG, which is led by Swiss entrepreneur and investor Peter Studer. He owns a big concrete and natural stone company in the posh city of Zug. K Spirit AG is his equine business.

The ride on the horse has been allocated to an amateur dressage rider, who is close friend of Studer.