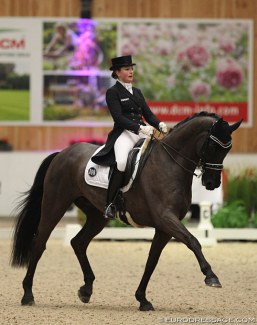 With the departure of his number one assistant trainer Ann-Christin Wienkamp, German professional dressage trainer Oliver Oelrich has tightened the co-operation with his student Florine Kienbaum, who has now started to compete some of his horses.

For the past 10 years Kienbaum has been training with Oliver Oelrich and has relocated her own business out of his yard in Lengerich, Germany. With the departure of Wienkamp as Oelrich's number one show rider, Kienbaum has stepped into that position.

"Since last year I have my own horses also in Lengerich and so it has offered itself to intensify our cooperation," Kienbaum told Eurodressage. "I am still self-employed as before, but Olli and I support each other in the training of young talents, whether horse or rider."

With local competitions starting up at great speed in central and northern Germany, after corona restrictions led to the complete standstill of the show circuit for two months, Kienbaum made her competition debut on some of Oelrich's entrusted horses at the CDN Nottuln on 23 - 24 May 2020.