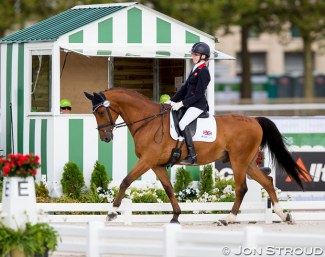 The para dressage world lost one of its equine legends last week as Janeiro 6 gained his passage over the rainbow bridge, aged 23.

Rio, as he was known, was the memorable partner of Sophie Christiansen and they stole the nation’s hearts with triple gold at the London 2012 Paralympic Games. Together they won a medal in every subsequent championship class they competed in together.

Para dressage trainer Clive Milkins was partially responsible for producing one of the greatest partnerships in the sport and tells his story of the Danish Warmblood Janeiro (by Jacquare out of Filia Flores) and Sophie in his own words.

Rio had already enjoyed a successful able-bodied career with the Eilbergs. Ferdi got him started and gave the reins to Michael and in 2008 they became Advanced Medium National Champions. Alexandria Barr took over the ride to campaign towards the European Championships before Ferdi rang Jane Goldsmith in April 2011, claiming to have a great horse with para potential.

Jane was my mentor and confidant and when she said we had a horse to go and see…I always went. At that stage, she wasn’t driving so I picked her up and off we went. We weren’t disappointed. There and then, I knew he would win gold medals in London…and I made very sure they knew that.

The deal was done and Rio moved to South Bucks RDA where Sophie began getting to know him with help from me, Di [Redfern] and Juliet Seal. Michael Eilberg came down too which I really valued. He had a great way with them both and just accepted the challenges Sophie has. As did Rio, he seemed to understand and just got on with his job.

I guess it’s simple to say ‘the rest is history’. Thirty international classes together, triple Paralympic and European gold medallists, double World Championship gold, only missing out on the hat trick due to a late night doping box test making him a bit tired. Even aged 19, he was fit and well enough to be Sophie’s reserve horse for Rio and I have no doubt that he’d have helped the team to gold if he’d have been called.

We retired him in 2016 and he moved closer to me at Ride2Achieve in Gloucestershire where he was cared for by Jo Alderton-Whitworth and Janet Alderton. He had the life of a king and enjoyed being a school master for young para riders, competing at the RDA National Championships, winning a class in 2018, aged 21. He ruled the yard with Jo, he had a harem of horses, donkeys and pigs.

He was a tough old goat at times but always with a sense of humour. It was virtually impossible to hack him out without him coming home alone and if you picked up a whip, he’d remind you he knew his job! He ‘allowed’ you to ride him and if you pushed too hard, he’d always get his revenge. His antics in squad training are still legendary! He adored Sophie and loved dancing with her, in the stable, he was my best buddy.

I always had complete confidence that he would do the job. Once he arrived at a venue, surveyed his stage, he’d settle in and focus on what had to be done. He knew he had to walk in the arena…and what a walk it was! Big and powerful, like a panther. If you rode him on the buckle end, you’d feel sea sick with the trunk rotation. His temperament made him a great team horse; reliable, a guaranteed high score as well as that extra something to get the individual marks.

Few para fans will ever forget Sophie’s freestyle in London. It was totally unique; Last Night of the Proms, Land of Hope and Glory with Shakespeare thrown in – a very British way to win a Paralympic gold medal on British soil. A score of 84.75% is still Sophie’s PB – one judge gave her 92%.

He was instrumental in my own career. He built on the early success Sophie had with Lambrusco and while she stood on the podium, for me he helped create a system for coaching grade I athletes ‘from therapy to international success’ – something I still use and put into practice in Canada, the USA and South America. Sophie too is putting back what he taught her into developing para countries.

So many people contributed to Rio and Sophie’s success. From Jane for finding him, to Michel Assouline for keeping us all trained up for peak performance on any given day, to the whole of Team GBR for their constant health and welfare support, and to both South Bucks RDA and Ride2Achieve, who kept him in the best of health the whole time I cared for him.

Many will say he was just a horse but for me he was such an important part of Sophie’s Dream Team. He was my confidant, my team manager and at many times my best friend as we shared many journeys and happy times together. If he was just a horse, what a horse - what a legacy.