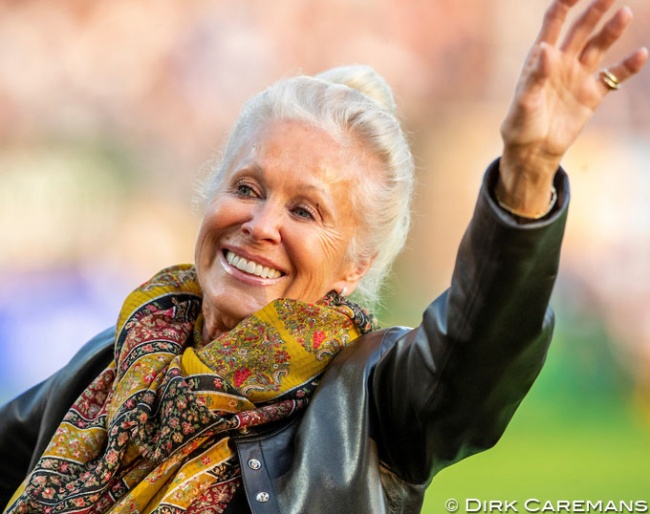 French Olympian Margit Otto-Crepin has passed away on Sunday morning 19 April 2020 at her home in Hamburg, Germany, after a short, serious illness.  She was 75 years old.

She bravely fought and lost a battle against cancer. She was briefly hospitalized before dying, but passed quietly in her home.

Born in Saarbrücken, Germany on 9 February 1945. In 1962 she went to Michigan, U.S.A. where got her high school diploma. She returned to study languages at the Sorbonne Univeristy in Paris.

Initially she wanted to become an interpreter for UNESCO, but Margit married Frenchman Daniel Crepin, an amateur show jumper who had two eventing lovings sons from a previous marriage. Margit worked two days a week as book keeper in her husband's clothing company in Paris.

In 1971 Margit declared for France and was first trained by Colonel de Ladoucette. Her first competition horse was Parliament.

To push her riding career to the next level, she sought out training with Fritz Tempelmann and relocated her horses to Dusseldorf, Germany, where she also got acquainted with the then 22-year old eventing rider Norbert van Laak. he became her trainer later on. In her career she also ended up working with Patrick Le Rolland, Dr. Uwe Schulten-Baumer,  Herbert Rehbein, and Udo Lange.

Her first championship horse was the elegant Selle Francais gelding Caprici, a former 3-day-eventer, with whom Margit Otto-Crepin became French Dressage Champion in 1980 and 1981.

However, Corlandus became her career making horse and one of dressage's greatest. The 180 cm standing Holsteiner gelding was by Cor de la Bryere out of Gustia (by Landgraf x Consul). Ridden at the time by Peter Mohr, Corlandus sold to Otto-Crepin right before Christmas 1983.

The dynamic duo went on to become fourth at the 1990 World Equestrian Games in Stockholm, and got bronze at the 1991 European Championships in Donaueschingen. Their biggest rivals at the time were Nicole Uphoff and Rembrandt.  At the 1992 Olympic Games in Barcelona, Corlandus failed the vet inspection and did not get to compete. Corlandus passed away in 2001 after a long retirement to the field.

Maritim took over the torch from Corlandus at the 1992 Olympic Games. Maritim travelled to Barcelona as a team reserve and after Corlandus failed the vet check, Maritim was allowed to compete in the Games as alternate. She finished 9th with the team and 19th individually.

Maritim was a Hanoverian by Matrose, which Margit had purchased for 170,000 DM (85,000 euro) as the price highlight of the 1981 Hanoverian Auction in Verden.

Otto-Crepin's show career reached a new height with Lucky Lord, a Zweibrucken gelding by Lord, owned by the Forst family.

The chestnut gelding took Margit to the 2001 European Championships in Verden, Germany, where they were 32nd. It was Margit's last Championship. Her last CDI was in 2003 on Corlino.

In the 2000s Otto-Crepin continued to ride, but she had moved away from Van Laak in Dusseldorf to Holger Munstermann in Werl, Germany.

In 2005 however, Margit relocated to Hamburg, Germany. She based her horses at Thomas von Samson's yard and went to live in Elbchaussee. At the time she still owned Corlino, Tornado, Whitney and Calimero.

After her active competition career, Otto-Crepin served on several committees. She was Chief Manager for Dressage in France, she was a member of the FEI Dressage Committee from 2009 till 2011.

Margit served as president of the International Dressage Riders' Club from 1998, taking over from Christine Stuckelberger, until her resignation in 2010. At that time, IDRC secretary-general Wayne Channon wanted to increase the influence of the IDRC within the FEI and pushed for changes. Vice president Kyra Kyrklund became IDRC president.

The Cadre Noir in Saumur, France, proclaimed Margit "Écuyer d’Honneur“ as most successful French dressage rider in history, even to this date.

Colonel Christian Carde, who competed against her, but who was also her team mate as well as chef d'equipe,  praised Otto-Crepin for "her elegance, her talent, her dedication to perfect herself and to work with her horses, her team spirit and spirit of camaraderie."

Horses continued to dictate Margit's life until the very end. She always said they were here "dada" like to the art expression.

She regularly attended dressage shows and often returned to the CHIO Aachen. In 2014 she was quoted saying, "when I look at the horses here I think 'wow'," and with that she referred to Valegro and Damon Hill. "I don't think the riders are aware of how much luck they have that our dear god has given them so much quality. I've never seen such functionally built horses."

She was the owner of the 9-year old Selle Français Balthazar de Fougnard (by Diamant de Semilly x Quidam de revel), an international show jumper competed by Portuguese Luciana Diniz. Balthazar's birthday is 18 April, the same as Corlandus and Loutano.

Margit's dressage horses will stay in the care of her groom Nathalie Kock, who has worked for her for 38 years. She had no children.

Due to the corona lockdown it is not yet clear when and where the funeral will be.